Articles in Blogging and Vlogging 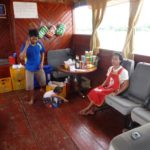 In Laos on the Mekong slow boat to Pakbeng, there’s a boy of maybe eight. His mom makes sure he has an afternoon nap and later, it is he who helps his dad with the landings. This is their life. Their business. Their survival strategy. We are passing through, each of us on our own paths, living our lives; ours dissecting theirs for this brief intersection of time. The engine putters. We pass inpenatrable jungle and hide-away settlements.

Thailand travel 17. Life and death in Chiang Khong by the Mekong 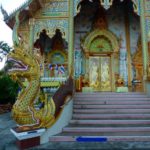 We leave Chiang Khong for the Laos border crossing. By the time we get on the tuc-tuc buses, backpacks on the roof, a little group of three French women journos, a Japanese man who will join me for buffalo for dinner at the Pakbeng overnight stop, a French pair, a Dutch pair, an Australian couple, a Mexican man and myself have all done some bonding.

Thailand travel 16. Chiang Rai to Chiang Khong and the Mekong 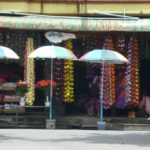 Snap some shots at a Chiang Rai flower market. Head back to pick up bags from The North hotel. Then 90 seconds to the Chiang Rai bus depot. A red bus this time. Local “milk train” bus. Three tiny ceiling fans. I head for the long back seat so I can put my backpacks in the large open area between me and the regular double row of double seats. 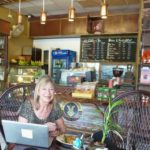 And that’s a real shame…

Thailand travel 10. To market, to market in Chiangmai and boomer no-buy joy 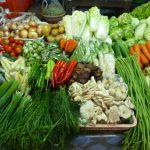 Walk down my side of the Ping River to upscale coffee shops and arty places. At some point across the Ping to Talat Warorot, which I now know is Chiangmai’s oldest and most famous market. Right next door to Talat Ton Lam Yai, which is the city’s fresh flower market. 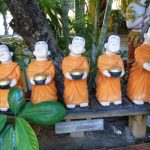 The swashbuckling mystery man from the tow path near Oxford writes, the night before I fly out: “You going to Thailand? On a whim? For four weeks? Wow. Well, if you find yourself in Chiang Mai or Chiangmai https://en.wikipedia.org/wiki/Chiang_Mai , you might want to look into the ‘monk’s chat’ option. You go talk to a monk at a monastery. It’s so they can practice their English.”

My backpack, my daughter and me: Part 1 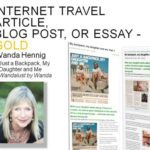 We set off on our European summer backpacking vacation one warm and sunny winter afternoon late in May. My daughter was 13. I was 30-something. We flew from Durban to London via Nairobi and found from the very beginning that learning while on the move is easier than ABC. Things are there all the time, waiting to be noticed, grasped and stored away in the memory with minimum effort.

Accessible websites give light where there was darkness 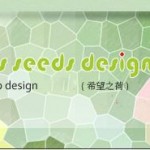 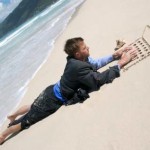 Persistence and regular blogging are key to SEO success and effectively marketing your business, leadership coach and social media / … 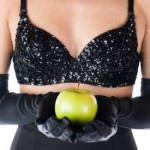 “Your time is limited, so don’t waste it living someone else’s life. Don’t be trapped by dogma — which is …

So what happens when Hawaii meets Vietnam meets Ko

Squeezing in our Virgo birthday lunch, on the cusp