Wanda Hennig is a travel, food and lifestyle writer, an author, editor and photojournalist.

She  has a great social media track record and is a certified co-active coach (CPCC) with a niche focus in creative mindfulness strategies, personal awakenings, self-empowerment, life transitions, and physical and emotional health and well-being.

See the notification, below right, of a 2017 “Gold” award from San Francisco Bay Area Travel Writers for a story published on this website: My backpack, my daughter and me. 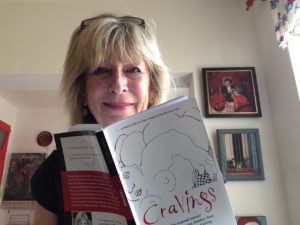 Wanda began writing Cravings—a travel-ignited inner journey with a powerful and pragmatic self-help focus—during the three-and-a-half years she lived and practiced at the San Francisco Zen Center in the Nineties.

As a writer, editor, photographer and communications professional she has notched up more than 25 years hands-on experience on consumer magazines and newspapers and in corporate and nonprofit communications, both in South Africa and the United States.

Wanda has post-grad degrees in psychology (BA Hons) and education (HDE—Counseling and English) from the former University of Natal, now the University of KwaZulu-Natal, South Africa.

To augment her coaching and in support of her clients, in 2012 she completed a 40-hour training course for family mediators with The Mediation Company in Durban, South Africa. Wanda Hennig writes about COP17 for Business in Durban.

Born in Durban, South Africa, Wanda’s first job in journalism was at The Daily News. She subsequently spent six years on the Sunday Tribune writing hard news and features before becoming the editor of the paper’s Sunday lifestyle magazine. (She is still an occasional contributor.) Her time on The Trib was followed by five years as bureau chief for the South African edition of Cosmopolitan where she was also editor of Cosmo Man.

While on these publications and freelancing for others—and in her personal capacity—she got to travel extensively around South Africa and internationally. She then flew to San Francisco with a one-year return ticket and for several years the Bay Area became her home from home. As the daughter of a Pole who settled in South African after WWll, she also has a strong affiliation with Poland. Link here to some her Poland travel articles.

She is a regular culinary contributor, from Durban, to TGIFood — Thank God It’s Food — the Daily Maverick food section. Link here to some of Hennig’s TGIF Daily Maverick culinary stories.

See some of her solo travel Thailand and Laos blog posts here. And a few of her—mainly—culinary travel links on the Facebook page Wanda Hennig: Cravings.

Wanda’s first California job was as special features editor on the now defunct Appellation magazine (Wine Country Living) when it was an international glossy headquartered in Napa. She was subsequently editor in chief at Diablo magazine in the San Francisco East Bay and editor of the former Black Diamond Living.

She also worked for 18 months on the Oakland Tribune copy desk and has been a regular contributor on both Oakland and Alameda magazines. Bigger events she has covered have included South Africa’s first democratic elections (for the Sunday Tribune), FIFA World Cup 2010 (city of Durban focus), the 123rd International Olympics Committee Session, COP17 and many others. COP17UpdateBiD

Wanda is a longtime freelancer and a widely-published photographer (she has a national diploma in photography from the former Technikon Natal, now Durban University of Technology, where Obie Oberholzer was a teacher and mentor). Her extensive freelance portfolio includes corporate clips, lifestyle features and profiles, culinary and travel stories and more. She has been copy editor on a number of publications.

In 2009 Wanda was hired as a consultant/coach by Oakland Zoo marketing and PR director Nancy Fillippi to plan and advise on the implementation of a custom social media strategy. She has written extensively about Durban and KwaZulu-Natal, South Africa, targeting U.S. audiences.

In 2013 she successfully completed (merit pass) a TEFL/TESOL advanced Certificate in English Language Teaching. She does volunteer TEFL/TESL teaching with Talk English. She is a full member of SAFREA, the South African freelancers association.

Among her intention with this site (Wandalust online) is to embrace the possibilities of the virtual world using the web, social media including blogs, the written word and the magazine format to connect and  communicate. Her life, interests and work are reflected in the stories (and services) she offers.

She has a meditation practice extending back to the 1980s and visits and runs workshops at the Buddhist Retreat Centre at Ixopo whenever she can. Her Zen practice informs her life and her work.

Travel Examiner September 2018: An Appetite for Lisbon. (This story was first published in Sunday Tribune Travel.)

Travel Examiner April 2017: A Lisbon Affair with A Famous Tart. (This story was first published in Sunday Tribune Travel.)

Travel Examiner January 2017: Culinary Poland in the Time of Chopin.

Cuisine Noir October 1, 2013 — Why you should put Durban on your South Africa travel itinerary

Reach us by e-mail here: