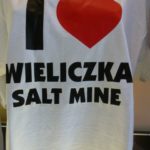 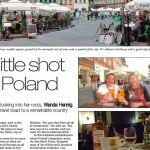 On her “roots” and culinary travel trip to Poland, Wanda Hennig comes to appreciate her vodka-pouring hosts, learns about nalewka — a traditional vodka-like drink infused with herbs, fruit, and/or spices — first at Krakow’s legendary Cafe Jama Michalika and later at upscale seasonally-inspired Pod Baranem restaurant (among other places). Not surprisingly, she comes home with the T-shirt…