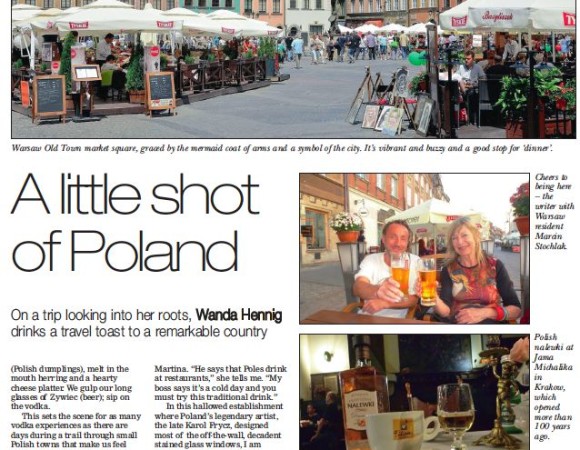 A version of this story was first published in Sunday Tribune Travel. You have to love these Poles. Every time they offer you a shot of something alcoholic, be it at breakfast time, lunch (which they typically call dinner — the main meal of the day, eaten mid to late afternoon) or after supper (not as big as “lunch” — but don’t worry, restaurants won’t restrict you), they tell you it’s for your health; or that it will warm you up. That it will whet the appetite (good apéritif) or settle your stomach (if you’ve overindulged). It’s a tonic. It’s restorative. It’s good for the constitution.

I am usually a wine drinker but prepping for my trip, I read that vodka is like wine for many Poles in terms of subtleties of flavor; that one might try sipping their smooth, refined vodkas with meals.

I also know from a previous brief foray that in Poland, they make excellent beer.

When in Rome, as they say — or, in this case, when in Warsaw: “I will have a beer — whatever is on tap — and a vodka,” I tell the waiter the afternoon I arrive. I have met up with a friend who, like me, had a Polish dad. We are going to spend a few days on a road trip, looking into our roots. Flavors of Krakow and surrounds as first published in the Sunday Tribune travel section.

My experience is that the atrocities of war, the Holocaust, the slaughter of non-Jewish Poles by the Germans and the Russians — one element or another of Poland’s devastating recent past — is never far from the surface all the time I’m there. Constantly what has gone before gives a sobering, textured foundation.

And then there is the buzzy and buoyant present, the entrepreneurial spirit (person after person), the vodka and the beer, the kilometers of fertile farmland and forests one drives or travels by train through, the culinary renaissance that’s going on, the engaging and welcoming Poles or any of the country’s abundant attractions.

By the time I arrive in Krakow I’ve upped the ante on my vodka drinking, grown pretty partial for a non-beer-drinker to quaffing long glasses of Zywiec (beer) and become familiar with the ubiquitous pierogi (Polish dumplings) and melt-in-the-mouth herring.

I get my Krakow bearings my first night by walked for many hours up and down and round about the thronging market square filled with people, bars and restaurants, some of them blasting out music, and finding a fabulous outdoor food market not more than five minutes from where I’m staying in a self-catering furnished apartment, Apartament Florian, close to one of the entrances to the historic central old-town market square area. (See the slideshow at the end of this article.) The next morning, my first in Krakow, thanks to Sarna Rose, president of Poland Culinary Vacations, who is based in Florida and who has put me in contact with Agnieszka Bratek of the Malopolska Tourist Organisation (who via e-mail has offered to help me plan the culinary part of my visit to Krakow, so that I can be sure to learn about “some places with traditional Polish cuisine” — restaurants and inns — and regional dishes and traditional food), I am met by Monika Mazanek, a local woman who will take me to a regional food market and Cafe Jama Michalika, which turns out to be a gallery-like art-filled restaurant and bar that opened more than 100 years ago.

We stop in for an early coffee and a kremówka — a custardy cheese cake often called a papieska (papal) kremówka since the late Polish pope (John Paul II) said it was one of his favorite things to eat.

I learn when I Google it that Cafe Jama Michalika is one of Krakow’s more famous bars and restaurants, day or night, for full meals, coffee and pastries or drinks. Long a haven for writers and creatives, in its heyday, artists — often more drunk than sober — swopped many of the the tongue-in-cheek, risqué, satirical art works that adorn the walls for food and (more) drink. A cabaret and poetry venue to this day, it was also here that, at the turn of the last century, a legendary burlesque-type avant-garde cabaret Zielony Balonik — in English, the Green Balloon — was born. Owner (since 1991) Stanisław Jerzy Kuliś — chef and writer — shares its history and stories through Mazanek, who is clearly too intrigued by what he has to say to translate much. They gab on. I look around and think I must learn Polish for next time.

After not too long Kuliś calls his pony-tailed manageress, Martina. “He says that Poles drink at restaurants,” she tells me. “My boss says it’s a cold day and you must try this traditional drink.”

In this hallowed establishment where Poland’s legendary artist, the late Karol Frycz, designed most of the off-the-wall, decadent stained glass windows, I am introduced to nalewka. A traditional vodka-like drink infused with herbs, fruit, and/or spices, the tradition was almost lost, I am told, under Soviet rule. But there’s been a strong revival with people making their own and small producers put it on the shelves. I learn that ingredients that lend their flavors to nalewkas include black current, cherries, walnut, sloe berries, strawberries — and in the case of the one we drink, derén berries, that I can’t find a translation for.

Infusions such as this typically come with the words “Good for you” — regardless of the time of day.

At a stop in one historic spot, the hilltop haven of Lanckorona, about 45 minutes by car from Krakow, we are poured a nalewka romantically flavored with rose petals.

It’s blustery and raining in Krakow a day later for my lunch date at Pod Baranem, reputedly the most popular restaurant among locals who want to indulge in upscale seasonally-inspired traditional Polish fare in the city’s vast medieval Old Town marketplace area.

I’ve barely had time to settle in when waiter Mariusz Scetlak brings me a what he tells me is “quince-infused vodka — made by the owner; to warm you up”.

It accompanies a small platter that includes a tapas-size serving of steak tartar. The restaurant prides itself in the freshness of the ingredients. Except for some of the more “exotic” fish that come via a contact at a market in Berlin, Germany, everything is locally sourced.

The meat for the tartar comes from a farm checked out by Pod Baranem’s owner and chef Jan Baran’s “number-two chef” son, Patrick. It’s prepared with gherkin and marinated foraged mushrooms, both made in-house.

“At the moment we’re making plum jams. The plums are in season. We freeze fresh berries to use all year and make jams which we can then reconstitute year-round in sauces, hot or cold.”

The berry mousse cheesecake I end my meal with is made from fresh berries. The intense berry drizzle in the velvety garnish that accompanies it is made from one of their berry jams, he says. It means they can keen this favourite on the menu all year.

Scetlak pours me what he says is Chef Jan’s special 14-year-old barrel-aged prunus padus-infused (bird cherry) vodka to accompany my cheesecake and coffee.

I have by now had another berry-infused vodka, made in-house, with my wild-boar dish. The restaurant works with a hunter who provides them with venison and boar, shot during hunting season in a nearby forest.

He has also poured me a commercially produced spelt (grain) vodka. This came with herring and salmon, both smoked on cherry wood.

I was offered the option of wine. It would have been French. Why, when the option was to sip on local vodkas / nalewkas made in-house?

I never imagined I would one day buy a vodka T-shirt, but at Frederick Chopin Airport, when waiting to fly out of Warsaw, I see a T-shirt that says on the front: “Polska is full of difficult choices.”

The difficult choices listed on the back are a range of vodkas: Zubrówka, Pan Tadeusz, Luksusowa, Chopin, Wyborowa. Time to say Na zdrowie!

Flavors of Krakow and surrounds as first published in the Sunday Tribune travel section.

The author in Krakow near the Florian gate and outside Jama Michalika.