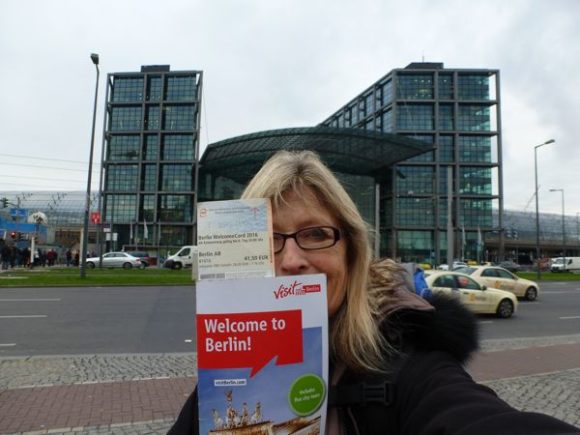 Berlin Welcome Card and the author in Berlin.

A yoga friend first recommends the Berlin Welcome Card. And a great idea it is.

But at the risk of inserting a spoiler at this point, her Berlin Welcome Card didn’t serve as a lifeline when she was robbed — of her passport, credit cards, debit card and entire stash of cash — the first time she used it.

Another spoiler: The above really did happen. Last Sunday: my first morning in Berlin.

And my initial reaction was a sinking feeling. And an: Oh shit. Now what?

But you know, life happens and we deal.

Yes, sure, I wish I hadn’t had to waste the time getting a replacement passport, cancelling and reordering cards — and worst, I had $175 in my purse for safe-keeping (plus a few Polish zloty and South African rand), when I don’t usually carry cash other than for small change for incidentals. A section of the Berlin Wall outside Potsdamer Platz.

But, do you know what? The biggest surprise for me was that being robbed and losing all of this wasn’t, in fact, a train-smash.

Not once I had stopped, breathed, and reminded myself it happens: all the time.

What helped hugely was that I have a pay-into Skype account, so I was able to call, from my laptop, to various international phone numbers. This was most useful for canceling the stolen cards. (Unsuccessful attempts had been made on all three to withdraw cash.)

I had a photo of my passport on my computer, with the number and all, which was reassuring.

And lucky me, I had left a debit card I wasn’t planning to use in my hotel room. So I was able to draw out €200, which among other things, covered my €40 temporary passport (plus €15 passport photos) and my train ticket on to my next stop, where I my replacement credit and debit card were awaiting me just three days later.

While I would rather it had not happened as it wasted time and money, it was a good learning experience in that I learned:

Getting back to my friend and her Berlin Welcome Card experience. She tells me she spent five days in Berlin and each day used it for a different informal “tour,” rushing hither and thither to see the sights of the German capital.

The card, in brief, is designed for tourists. You buy one that has a sliding cost scale depending on whether it is for 48 hours, six days and various options in between. It gives you unlimited use of the city’s various public transport options. Plus, you get discount to paid attractions (like 25 percent off the hop-on hop-off bus trip, which I did on my arrival the previous afternoon). It comes with maps and assorted one and two day personal tour options, well laid out and broken down into suggested routes.

What it didn’t come with, which I found challenging, were details on how the Berlin transport system works. I find the London Underground easy. And have used the Paris metro, the San Francisco Bay Area’s BART system, New York’s and Singapore’s and Hong Kong’s and that of various other cities dotted around the globe — and have found them pretty simple and intuitive. The author inside the stylish Bikini Berlin roof garden and restaurant.

I read the info that came with the Welcome Berlin Card and studied the map pretty exhaustively. And remained puzzled.

There is possibly a YouTube video explaining their system. If so, I would recommend it before you come to Berlin. But I set off on the Sunday morning determined to figure it out. Believing it would fall into that category of “it’s easy — when you know how.”

To get there, I just had to figure out how…

Armed with determination and curiosity, the card, the transport system map and the commitment to do the suggested Fast Track Berlin one-day tour, I set off.

Now, I regard myself as a savvy South African traveler. I add South African in there as if you live in South Africa, you learn to be street-wise and vigilant 24/7. I thought my purse was securely stashed and zipped away. But yes, in South Africa I would have carried it more securely.

So anyway, the purse (wallet) was in one bag, along with my apples and lipsticky things and not much more. I did think of putting everything into my favorite London Portrait Gallery-purchased carry bag. But I took both, the latter with camera and iPad. Never would I usually have gone “underground” for just one stop. But to break the ice and acclimatize to not walking for miles, my usual modus operandi in cities, I got on at Anhalter Bhf, near my Ibis hotel lodgings, to ride to Potsdamer Platz, a stop away, where I would figure out how to get to Alexanderplatz.

I was trying to figure this out when riding up the short escalator at the destination — an escalator that suddenly stopped mid-escalate, which caused me to wake up and look round. At which point, I saw there were, it seemed, four others behind me; nobody closer than two escalted steps away.

We all walked up.

And I did not listen to the sense I had… that my “purse” bag, the one with the zipper, was suddenly lighter.

In Potsdamer Platz, I wandered around looking at entrances to what seemed like undergrounds and train stations and I looked at my map and I went outside and looked at the remains of the Berlin Wall and walked a bit then headed back down and looked again at my map…

At which point a woman, middle aged, blondish, looked like she could have a bit-part in a German movie, came and asked if she could help me. “Your map is too small,” she told me when I said — feeling suspicious but and not sure whether to feel guilty at my suspiciousness — I couldn’t figure out the route to where I wanted to go. “Here,” she said. “I have a bigger map for you. I always carry them around to help people who look lost.”

Something about a vest sticking out beneath the neck of her dress — something about her being there and the time she had on her hands — “I can come with you and show you the way,” she offered — disturbed me.

I clutched my hand-held bag close. It seemed odd she could not give me directions quickly and clearly if she was a Berliner… Another woman passed by. “Can you help us?” I asked. The three of us got into conversation.

Then I beat my retreat citing claustrophobia, which I was beginning to feel.

Upstairs again and outside, still having a sense that my zippered bag seemed lighter than it should be, but my logical mind telling me that was not possible, and thinking I must not have put the apples in there, I stopped to do an exchange.

And that is when I saw the zipper was half open. And when I looked inside, I saw my purse, with my passport, two credit cards, a debit card, $186 in cash and a few rand and some zloty — was gone.

Can you believe it? I couldn’t. What to do? I saw the second woman from “downstairs” standing at the top of the escalator — outside. I went to her and told her, with some agitation and a sense of disbelief, that I had been robbed. My purse was gone. Everything in it. And I thought it was the woman from downstairs.

She didn’t have much English but when she realized my problem, she called the police for me, before a taxi came and whisked her off.

I told the three cops my story.

And now, thinking about it clearly, I was sure it had happened as the escalator stopped.

They, in turn, told me I had been targeted in the two most common ways tourists are currently being targeted in Berlin. The four people behind me on the escalator would have been a gang, working together. (Most likely Romanian.)

The “stop the escalator” trick was designed to distract me at the moment the hand went into the bag for my purse (wallet). And it did (distract me).

Because as I say, while I saw nothing suspicious and nobody close, and this was Sunday morning in — not a busy metro station at the time — I had a subconscious feeling that my bag got lighter at that point, and this feeling remained with me, but I did not “listen” — as it did not seem logical. (That there were four people on the escalator behind me, I noted after the fact, told my logical mind to relax: one of them would have spotted a thief and raised the alarm. Ha Ha! Clever ploy…) The cops told me the woman — not part of a gang but a (second) would-be thief — was trying to get her map open over my hand-held bag so she could put her hand in when I was distracted — probably hoping for the same purse. Given my suspicions, she had no luck.

My initial thought was no money, three weeks to go before I fly back, plans but none of them committed to and paid for — no passport — what to do?

But that’s when the voice of reason reminded me that this is common. It happens every day (travelers robbed; passports and cards stolen). It can’t be that difficult to resolve.

As I say, when I called to cancel my credit and debit cards, it turned out the crooks had tried to withdraw money from all of them: but needed my password so had no joy.

A German journalist — brother of a friend — sent me detailed directions on how to get to the consul to get a substitute passport, which was most helpful. And now my Berlin Welcome Card came into its own. It really does make life easy when you don’t have to think of buying tickets. Or paying a €60 fine, which I am told is what they hit you with of you’re asked to show your ticket on any of their trains and you don’t have one.

Not to be defeated, that (Sunday) night I set off to continue with my card-mastery plan — and actually got to use a second U-Bahn or S-Bahn or whatever else they have by way of metro system in the Berlin transport mix. So progress was made.

And more was made during the next three days. So next time I go to Berlin, which I hope and plan to do, it will all be easy — as I will know how.

And I will take my South African street-wise-ness with me on future trips around this amazing and diverse city that unfortunately, like any city, has its fair share of preying motherfucker crooks.