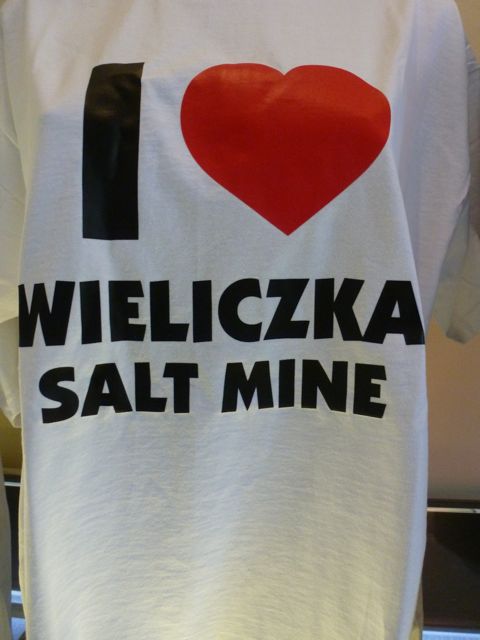 Entering Wieliczka Salt Mine is like being transported into another world. A unreal, mystical, subterranean nether-world.

Salt mining started here in the 13th century and the mine produced table salt continuously until 2007. Not surprisingly if a little eerily, the adventures, the stories, the lives of men and women who have lived and worked (and sometimes died) here, deep in the bowels of the earth, infuse the place. You feel it, sense it — or at least I did — as you descend after entering.

As you climb down, down, down the narrow wooden stairwell into a nether world of caverns and tunnel-paths and overhangs. Small wonder the Wieliczka Salt Mine — a UNESCO Heritage Site — is one of Poland’s top tourist attractions.

Among the many marvel-at spectacles, w-a-y underground is a cavernous cathedral-like church where one can attend real-time mass on a Sunday morning.

The whole place must rank among the world’s most unusual art galleries. The artists are the unsung heroes: regular miners with a passion for forging sculptures from the rock-salt that was their livelihood.

And on a function note: to eat in the restaurant here is not trendy underground dining San Francisco-style. This is the real thing. We ate well in the salt mine: at the Wieliczka Salt Mine underground restaurant. Keep reading for more on that. The author inside the Wieliczka Salt Mine cathedral.

Diamonds in the chandeliers

Our Wieliczka Salt Mine guide is Mark Strojny. He tells me that 13-and-a-half million years ago there was a sea here. Hence the deposits of rock salt, which is naturally dark green.

We will, he says, initially walk down 380 wooden stairs into the mine. The mining started in 1280. The mine goes down nine levels. There are 200 miles of tunnels and 3,000 chambers.

Our tour will take us through about one percent of this labyrinth, located beneath the town of Wieliczka. In all we will walk 3km and see 20 chambers.

Commercial mining stopped here in December 1996. Salt production still takes place on the surface, says Strojny: from brine that is boiled to extract the salt.

Besides some wood carvings and effects in several small chapels, almost everything is carved from salt including a Twelve Apostles scene, a larger-than-life size replica of the late Polish Pope (John Paul II) and even the “diamonds” in the chandeliers in a cavernous underground Sunday-mass “cathedral” where tourists arrive by the score and pose in groups for photographs.

Miners, Strojny says, were responsible for all the salt sculptures and carvings, including those of the Twelve Apostles and the late Polish Pope — and even the salty “diamonds” in the chandeliers. The miners carved out 40 churches during mining days. Up to 9,000 people a day visit in the summer, says Strojny.

The Wieliczka Salt Mine is about half an hour by car from Krakow. For visitors, the regular 3km (1.9-mile) tour features corridors, chapels, statues, an underground lake — and many stories. You walk down. An elevator returns you to the A detail from the salt-carved Twelve Apostles.

surface at the end.

The main lofty huge underground church was carved over a period of 67 years, by miners working in rotation. The weekly Sunday mass here at 7:30am. It is also used as a concert venue. It is the deepest church in the world at 310 feet or 101m below the surface.

We eat lunch underground, in the Salt Mine restaurant.

Our starter is fresh and light smoked salmon and feta salad. This is followed by cream of broccoli soup (delish with a dash of pepper) with small rice noodles.

Our main course is sun-dried tomato stuffed chicken. It comes with a salad of grated carrot with a lightish yoghurt/mayo dressing. There’s Polish apple juice to drink and for dessert, Polish chocolate cake with a light raspberry sauce. Lunch in the Wieliczka Salt Mine restaurant.

Home-made fruit-infused vodkas, made with fresh cherries, green nuts, raspberries, other berries, are very popular, Strojny, tells me over lunch. You drink them for your health and to aid your digestion — not to get drunk. The fruit is never cooked.

Fresh, mixed with some sugar and the alcohol, up to 90-plus proof, is reduced to about 50 percent with water used with the fruit. Try Jamie Oliver’s home made citrus-infused vodka recipe.

For an online tour of the mine — they have an excellent website — click through to the About the Mine link and be amazed.

And to see their cosmetic range of salt-inspired health and beauty spa products, check out the Wieliczka Salt Mine e-shop. (When you visit, allow some time to browse both their cavernous underground store and the well-stocked store at ground-level you exit through after alighting from the elevator.)

For more on Krakow and surrounds contact the Malopolska Tourist Organization in Krakow.

Arrival point at the Wieliczka Salt Mine near Krakow.

Cafe in the salt mine at the Wieliczka Salt Mine.

The underground cafe at the Wieliczka Salt Mine, Poland.

A T-shirt on sale in the Wieliczka Salt Mine store.

Our starter is fresh and light smoked salmon and feta salad at the Wieliczka Salt Mine restaurant.

Dessert is Polish chocolate cake with a light raspberry sauce in the Wieliczka Salt Mine underground restaurant.

A group poses for a picture in the cavernous salt cathedral at the Wieliczka Salt Mine.

Salt on display in the Wieliczka Salt Mine.

Last supper and the Twelve Apostles carved from the salt in the Wieliczka Salt Mine cathedral.

Another detail from a salt sculpture in the Wieliczka Salt Mine.

Guide Mark Strojny in the Wieliczka Salt Mine near Krakow.