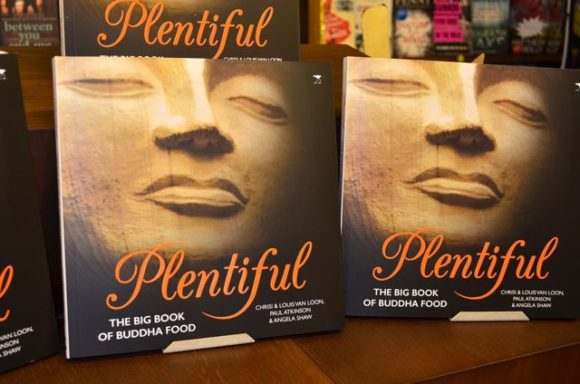 Plentiful: the Big Book of Buddha Food at Adams.

Thank you for asking me to be here to celebrate the launch of Plentiful. I am delighted and happy. For going on 30 years, the Buddhist Retreat Center has been a haven: one of my most singular favorite place anywhere…

Tonight I am going to start by sharing a couple of “Louis stories” and then talk a bit about food in the context of Buddhism and Zen practice — and Plentiful: the BRC’s third recipe book.

The last time I was at the BRC, three or four months ago, chatting with Louis, he went back in time to the very first weekend the BRC opened to guests. For 10 years, he and a handful of supporters had been creating what was the early BRC.

Finally it was time for the grand opening.

Now back then, remember, mindfulness and meditation weren’t common concepts, as they are now. There were no celebrity Buddhists like Richard Gere. It was way before even a science fiction idea of social media.

The question was: how to publicize what was, then, an unusual concept for South Africa? Louis placed a couple of small ads in the classifieds section of the local papers. He printed some flyers. Adams — the then-version this very bookstore — and a long-gone health food store agreed to put the flyers in their windows.

There would be two teachers that first weekend. Louis and Antony Osler (author of Zen Dust and other books), who many of you will know. Antony was living at the BRC by then: the first residential meditation teacher.

They prepared their workshop material. Basic Buddhism. Then they waited.

The student was ready and two teachers were waiting

The weekend arrived. And one person turned up. One woman.

The student was ready — and two teachers were waiting…

And so, Louis told me, in good Buddhist “put one foot in front of the other” and “just do it” fashion, they progressed with the weekend.

It was a silent retreat. The teaching was in what is now the library. The meditations were in the meditation hall. The schedule was followed. After the evening sessions, Wendy (the student) went back, alone, in the dark, to the 30-bed lodge.

And dutifully, says Louis, turned up next day in time for the early morning mediation session and the silent breakfast.

And how things have changed, as anyone who now goes there knows.

Mindfulness and meditation are now the norm for many.

The BRC — everything from the accommodation to the physical property to the schedule — has expanded, become richer year by year: no small thanks to Chrisi’s vision, commitment and hard work.

Waiting lists are commonplace. International travelers flock in, the BRC’s fame having spread.

Meanwhlle — again going back in time. To before 1970. To when the idea for creating a Buddhist Retreat Center was still in its dream and vision stage.

Louis told me quite a while ago that he had been guided and inspired in terms of the Buddhist Retreat Center table and the food by a visit to the San Francisco Zen Center in California.

He only recently shared what to me was the Wow! part of the story. We’ll get to that just now.

But first: many of you will probably know that the significance of food in Buddhism goes way back. Wanda Hennig, invited speaker at the launch of Plentiful at Adams.

Detailed directives for oryoki — the formal way of eating during retreats in a Zen monastery (think Japanese tea ceremony for an idea of the formality and form) — dates back to medieval Japan.

The text: Instructions for the Cook, completed in 1237, gives specific guidelines for preparing, cooking, serving — and even eating food — in ways Miss Manners would approve. One should not, for example, make noises when chewing, scratch ones head and let dandruff fall into the bowl, or pick out food from the teeth without covering one’s mouth, to quote from the translation.

The tenzo or head cook has traditionally been one of the most senior roles in Buddhist monasteries.

Now I happen to know the San Francisco Zen Center really well because I lived and practiced there for nearly four years in the Nineties.

The City Center on Page Street in San Francisco: my base.

Also Green Gulch Farm or Green Dragon Temple in Marin County, which was famous then, as it is now, for its organic farming and gardening.

And the Tassajara Zen Mountain Monastery in the Carmel Valley: a residential Zen monastery and practice center in winter that opens to visitors in summer many of whom go there to enjoy the hot springs and the legendary vegetarian kitchen and food. Chef Paul Atkinson answers questions at the launch of Plentiful.

The former head chef at Chez Panisse in Berkeley, one of California’s most famous restaurants (not vegetarian), Jerome Waag, trained in the Tassajara kitchen. [He told me it’s the only kitchen he’s been in where, in winter, it was warmer inside the walk-in fridge than in the general kitchen working area.]

Greens restaurant, San Francisco’s most famous vegetarian restaurant, which opened in 1979, belongs to the San Francisco Zen Center. Annie Sommerville, the head chef at Greens, trained at Tassajara — and uses a lot of Green Gulch veggies. She, and Greens, have put out a number of vegetarian cookbooks.

So, interestingly, Louis had mentioned that his vision — to make wonderful vegetarian food a feature, focus and signature at the Buddhist Retreat Center — had been inspired by a visit he made to SFZC’s City Center and Green Gulch Farm.

What he hadn’t shared was how he got to be there: which proved to be another fantastical Louis story.

As I said, it was prior to 1970. He hadn’t yet bought the BRC property. When one day his late wife, Molly van Loon, brought it to his attention that the Sunday Tribune was running a contest.

You had to write a little poem of 17 words saying why you should win a trip around the world that would take you to 11 cities. He picked up a pen and some paper, wrote 17 words and gave it to her to enter. He told her it was going to win.

Probably each of the 20-plus-thousand fellow entrants thought this too — or at least hoped!

But he was correct. His entry did win.

So off they went. Japan, Korea, Hong Kong and elsewhere visiting Buddhist centers wherever they could find them. Peter Adams welcomes the audiences and introduces the speaker.

And that’s how, on the stopover in San Francisco, he got to the SFZC City Center, which he says, had a bakery across the road and a strong focus on food. And Green Gulch, with its seasonal garden, even back then.

Louis was already a vegetarian, having started a vegetarian movement in South Africa after coming here from Holland in 1958.

But prior to San Francisco Zen Center, all the Buddhist Centers he’d been to had one thing in common that was lousy: the food. “Terrible food!” he says. “Food that made you want to ditch vegetarianism and eat meat.”

His visit to SFZC “was such a contrast”.

“I felt this should be part of our effort. There should be attention paid to the food as part of holistic living and taking care of your life.”

Back to the BRC. The kitchen was, naturally, vegetarian and Molly van Loon typed up the first little recipe book early on.

I recall when I went there the first time, all those years ago, they had a spiral-bound book for sale: Just Cook It.

The problem with Just Cook It was that nobody had every checked the quantities, so people would eat the food at BRC, buy the book, try the recipes at home and “basically, they never worked.” Enter John Strydom. John lectured psychology at Howard College when I was a student there. Next time I saw him, he’d moved to the kitchen at the BRC. He spent six months there as head chef running the kitchen. Then he moved to Hogsback for a year.

He took the recipes with him and spent the year testing them; knocking them into shape; refining them. Audience shot at the launch of Plentiful.

And that is how Quiet Food, the first BRC cookbook, came about.

Then Daniel Jardim moved to the BRC and spent two years as head chef, working in the kitchen. He brought a strong background of cooking, nutrition and vegetarianism. He, in collaboration with the “kitchen ladies”, evolved a whole lot of new recipes.

They became the inspiration for the BRC’s second cookbook, The Cake the Buddha Ate.

The recipes in this new cookbook Plentiful, are the inspiration and creativity of Paul Atkinson, who will tell you he learned from the ladies and collaborated with them. Their favorite recipes are also featured.

Paul learned to cook in a seasonally focused cafe-bistro with an eclectic menu in York, England. He spent two years at the BRC with his yoga teacher wife, Amy Best.

Paul iis delightful to do a workshop with. “Cook by feel. Add a glug of olive oil. Always remember, it’s your food,” I remember him telling people, as he inspired them (us!) to experiment and enjoy.

Now it’s time for you to — enjoy this new cookbook!!!!

With thanks to Alan Wilson for the book launch pictures.