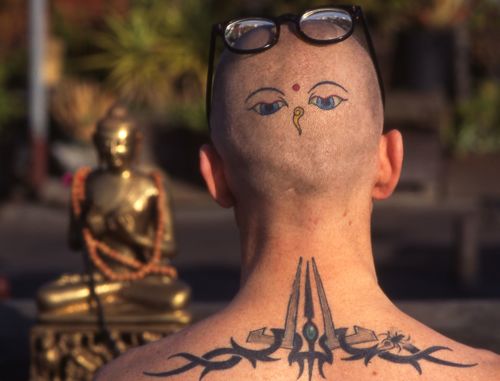 A summary of research collected for a grant proposal for Zen meditation and mindfulness workshops. Our sense of self is most keenly felt in the emotions we experience—emotions that seize us and determine how we feel and perceive the world.

There is a huge and pervasive spectrum of painful emotions that we experience as, and label, depression. These range from periods of sadness, grief and general pessimism about our lives and the world to full-blown and incapacitating clinical depression.

In 2007 the World Health Organization called for depression—arguably the world’s most disabling disease—to be recognized and treated as an urgent health priority.

Given its devastating impact in combination with a host of physical maladies including heart disease and cancer—plus the link between depression and suicide—it has been called the world’s greatest killer.

Some health economists equate the disability caused by major depression with that of blindness or paraplegia.
Each year more than 18.8 million American adults, and 3.4 million American teens and children (under age 18), experience debilitating depression. In a 2004 survey, nearly half of all college students reported feeling so depressed at times they had trouble functioning.
Postpartum depression affects one in 10 women following childbirth.

Some six million older adults are affected by late life depression; a figure expected to rocket with the boomer age wave.
New research shows a strong correlation between depression and Alzheimer’s disease and other forms of dementia.
Depression is responsible for more than $87 million dollars annually in lost productivity in U.S. workplaces. Nationally there are approximately 30,000 suicides annually, as compared to 20,000 homicides.

Depression results in damage to the body, brain, mind and world. It shortens the life span even if the sufferer doesn’t commit suicide.

Repeated episodes permanently damage the neurochemistry of the brain; decrease the size of the hippocampus; and result in brain shrinkage.

These facts and figures relate to diagnosed major depression and as such, represent the tip of the iceberg in a sea of human suffering. Depression is widely misunderstood, hugely undiagnosed and vastly underreported. Functional depression can take many forms and incorporate a wide range of emotions and behaviors; from extreme melancholia and dejection to being constantly anxious or angry; to acting aggressively; temporary sadness and predictable grief; to the feeling that life has no meaning and that one is worthless.

The Zen of Mindfulness Current brain research and the discovery that neurons that fire together, wire together is producing concrete evidence for something Buddhist practitioners have maintained for centuries: the sustained practice of mindfulness can change the workings of the brain at a molecular level and allow people to achieve different levels of awareness.

Zen training provides, in effect, a tried and tested 2,500-year-old “scientific” method of exploring, experiencing and working directly with the mind.

Neuroplasticity—how repeated experience causes the brain to rewire itself at a cellular level—is the “why” behind how the techniques of Buddhism work.

The “how” lies in learning simply to rest in a bare awareness of thoughts, feelings and perceptions as they occur—the gentle, focused awareness known as mindfulness. Through mindfulness practice we generate lasting changes in the electrical and physical structure and functions of our brains.

Some research–based examples of mindfulness in action:

Monitoring of prefrontal lobe activity in Buddhist monks during meditation, using fMRI scanners and EEGs, has revealed shifts in the neuronal circuitry.

Regular mindfulness practice has been shown to increase communication between different areas of the brain, resulting in “whole brain functioning.” Buddha wearing specs snapped by the author in Laos.

While anti-depressants and cognitive therapy can be efficacious in treating major depression, both have limitations and neither prevent relapse. “You can get substantive relief from the symptoms but you’re likely to keep stepping in the same hold if you don’t change your assumptive world.” (O’Connor)

Mindfulness-based cognitive therapy for depression (Segal, Williams and Teasdale) has been clinically proven to bolster recovery and to prevent relapse. More than 10,000 people with a range of conditions, including heart disease, cancer, AIDS, chronic pain, stress-related gastrointestinal problems, headaches, high blood pressure, sleep disorders, anxiety and panic, have experienced long-lasting physical and psychological symptom reduction, as well as deep positive changes in attitude, behavior and perception of self, others and the world, in mindfulness-based stress reduction classes at the University of Massachusetts Stress Reduction Clinic. (Kabat-Zinn)

Mindfulness practices have resulted in positive effects on learning and behavior in institutional settings and among the aged. (Langer)

Mindfulness skills have helped obsessive-compulsive disorder patients lay down new brain circuitry, noting by way of PET scans to say: “this is only a brain glitch, it’s not reality.” (Schwartz)

In Relapse Prevention Therapy for addictions, mindfulness skills have been successfully used to help the patient stay present and to ride the waves of the craving rather than to struggle against the tide, a technique known as “urge surfing.” (Marlatt and Gordon).

Mindfulness practice has had good results with ADHD in children and adults; insomnia; eating disorders; anxiety, panic and phobic disorders; aggression and recidivism in prisoners.

To quote UCSF biochemistry professor, Dr. Elizabeth Blackburn: “We’ve been collaborating on studies looking at brain telomerase levels in people who practice meditation. One of the really interesting things about doing research these days is how interdisciplinary it has become. Ten years ago, if you’d told me that I would be seriously thinking about meditation, I would have said one of us is loco.”

The program—a one-day class followed by a week of group meetings—incorporated mindfulness meditation, yogic breathing and asanas, and cognitive coaching.

The mindfulness and body-centering techniques taught help workshop participants achieve a clarity and wisdom that empowers them to engage with their emotions in new and freeing ways. In becoming aware of habitual thoughts, perceptions and sensations, rather than being carried away by them, their power begins to fade.

Participants learn to relate to depression with compassion by paying attention and bringing kindly awareness to difficult thoughts and feelings. They learn to notice the tendencies of the mind and the impact of running on automatic pilot, and to recognize and disengage from mind states characterized by self-perpetuating patterns of ruminative, negative thought.
In coming to directly perceive and understand how thoughts arise and how experience is processed, participants are able to mentally change gear and make shifts in their relationship to thoughts, feelings and bodily sensations associated with depressed, negative and habitual forms of thinking.

During the workshop and through a take-home skills set grounded in our 2,500-year-old practice, participants practice identifying, relating to and interrupting conditionings that keep them stuck.

The positive response for the “Transforming Depression” workshops have seen them become a regular offering on the SFZC workshop calendar—City Center and Green Gulch. Visit the San Francisco Zen Center online to see their workshop schedules, for contact details and for more information. The initial research for this story was done in 2008.