My backpack, my daughter and me: Part 2 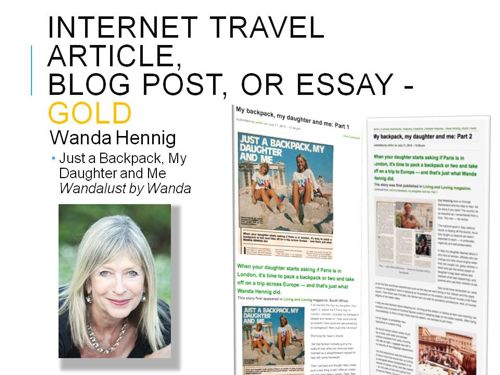 When your daughter starts asking if Paris is in London, it’s time to pack a backpack or two and take off on a trip to Europe — and that’s just what Wanda Hennig did.

This story was first published in Living and Loving magazine.

Continued from Just my backpack, my daughter and me: Part 1 Fun — and often delicious — times in Europe with a backpack.

Our hitching took us through Switzerland and the Alps to Italy. Italy! Go there if you dare! The country was as beautiful as I remembered from past trips. The men — far worse.

The national sport in Italy, without doubt, is ripping off the tourist. As such, Italy taught us lessons we hadn’t expected to learn — in arithmetic, ingenuity and self-preservation.

In Italy my daughter learned about men who hiss at women, officials who short-change and who shout angrily when they are caught out, gipsy children who steal (one got the whole zipper of daughter’s bag open before she realized what was happening), and parents who use their children to beg.

Italy could have exhausted us, were it not for the few wondrous experiences such as the day we went along to the Vatican and the pope touched my daughter’s hand in blessing as he passed on his weekly Land-Rover rounds of St Peter’s Square. Then there was Pompeii, the former lost city with its wonderful architecture. And, of course, the delights of the Italian table.

In Italy we also learned about sleeping out. Arriving at the station in Venice at 4am one morning, we stumbled over a couple of hundred figures curled in sleeping-bags on the steps outside. After trying, unsuccessfully, to find a cheap hotel near the station, we decided to join them. Pope Paul II, doing his Vatican rounds, comes right by us with blessings.

And so began a completely new experience in outdoor living.

We found Venice station pretty much like a hotel, with toilet and shower facilities available from early morning until late at night. Luggage was left in the security of the baggage department.

This first experience was the forerunner of many more that would see us curling up alongside fellow backpackers in all manner of places of the next few weeks — on the deck of the ferry going from Brindisi to Patras, for example, and on the beaches of the Greek islands.

Greece, land of many splendors

Greece, land of many splendors, was a place where we could happily have stayed — for ever.

Greece, for pupil and adult alike, has it all. A history of art, architecture and culture that goes back to time immemorial, people who are generally pleasant — and most of whom speak pretty good English; consistently the best food (our introduction to sheep’s milk yoghurt, real moussaka and goat stew) and ice cream in Europe (we tested and rated the ice cream all the way) — we learned about these things, too; and a relaxed lifestyle that’s affordable. My daughter in Greece.

I would be denying reality if I said Greece was all roses. Our first night in Athens after arriving late in the evening and desperate for a place to drop our bodies and our backpacks, we found ourselves in the sleaziest hotel I have ever seen.

But on the whole, Greece was great. So great, we spent almost a month there instead of the planned two weeks.

Any parent thinking of taking an offspring overseas and wishing to limit the trip to one place, couldn’t do much better than Greece. In one day in Athens, for example, our horizons stretched from the dawn of history to the present. In the morning we visited the National Archaeological Museum where works dating back to 400 and 500 BC are commonplace. In the evening, we went to a rock concert at the old Olympic Stadium. There, the Acropolis providing the backdrop, we watched top rock-punk groups including The Stranglers, The Cure, Talk Talk, Telephone, Nina Hagen — and an out-of-favor Boy George, booed and pelted by once-adoring fans.

Daughter’s Greece: “It was wonderful lying on the island of Skopelos at night, watching shooting stars before going to sleep. It was interesting to see the Parthenon and how the pillars look straight from any angle. Boy George is ugly and looks nothing like his pictures. The donkeys are lovely and the old ruins great.”

We drive with a friend the length of the French Riviera My daughter salutes the affluence of Monaco.

France was out last country of call before returning to Britain and home.

France, center of art and culture, was very relevant to the school syllabus of a Standard 6 pupil busy learning the basics of French.

We drove, with a friend who joined us for a week, the length of the French Riviera. With him, we mooched around Monaco, called in at Cannes, touched down in St Tropez and ended up in the swamps of the Camargue, where wild horses really roam and thousands of flamingoes fan the skies with their pink-shadowed wings.

Daughter’s France: “We’re learning about the French Revolution and after seeing Paris, this is far more interesting. What sticks in my mind are the Eiffel Tower, the Notre Dame and lots of pampered dogs.”

Investment in the future

I saw the trip as an investment in my child’s future. I hoped, by exposing her to different lifestyles, her horizons would broaden. She enjoys the Athens vista.

As it turned out, they did. And so, without doubt, did mine!

A lot of what we learned, we could never have anticipated. For example, the more basic things in life become very important when you’re living without rules and a fixed place of abode. When you can’t find a toilet in the middle of Munich on a Sunday morning, everything else pales into insignificance. When you find a toilet in Brindisi at 1:30 on a Friday afternoon and it’s “Closed for lunch” you just resign yourself and cry!

On a personal level, I think the experience of living together as we did, day and night and for just over three months, was invaluable. Living together as we normally do — a single parent and only child — we are close. But any parent who works knows how difficult it is to make solid lumps of time to spend with your offspring.

On our holiday, I learned about her, discovered that she’s physically tough. She could happily curl up on a sleeping bag anywhere with no ill-effect. Mentally, she’s disciplined. She did all her school work and says she’s catching up fast with what she missed. Emotionally she’s strong. She offered great support on occasions — it can be weary work, backpacking, weighed down by a bag too heavy to carry, except on your back. She said she had learned a lot about me. I prefer not to know exactly what that means, but she seems to be getting round me a lot more these days!

I wish my folks had done that!

We had a positive response from the dozens of fellow backpackers we met along the way — eastern Europeans, Scandinavians, Australians, Americans — students, nurses, teachers and general holiday makers.

On the whole they were an enterprising, interesting and friendly bunch, their common aim to see as much of the world as inexpensively as possible.

Most guessed we must be sisters. On hearing we were mother and daughter, the common response from make and female was: “I wish my folks had done that!”

Would I recommend backpacking? Most definitely, yes. You might live under the constant threat of toppling on to your back and, like a tortoise, being unable to right yourself again, but you don’t end up with blisters on your palms.

Would I recommend roughing it for longer rather than going for a brief, organized tour? You bet. On a day trip to the Isle of Capri.

I’ll tell you this, you learn a lot about yourself when you’re taken out of the comfort of everyday life. A sleeping bag on a wooden boat deck, for example, can be as comfortable as a four-poster bed. Getting dressed for the Monte Carlo Casino in a car on the Nice promenade (des Anglais) with make-up done by torch-light might not be bliss at the time but it’s the stuff memories are made of.

Would I recommend traveling with your child? Most definitely. Personally, I can think of nobody I’d rather have had with me.

My daughter’s conclusion? “I learned there’s much more to life than school, videos, TV and discos. Each place we went was different. Every day seemed like several days because we saw so much that was new. I think I’ve become a more interesting and interested person.

“Still, I like going to school and am happy to be home.”

The other day I heard my daughter tell someone she had been to Morocco. She meant Monaco.
Was I disappointed in her? Not a chance. Now we have the excuse to save up and do it all again.

Good luck and be sure you leave yourself a few days of rest at the end of the trail!

London friends left us their front-door key under a brick in their garden. They’d headed off to Greece. We spent a week there unwinding, harvesting from their allotment, having London-based friends to visit, visiting others for overnighters, experiencing more London sights and generally getting our respective breaths back in congenial fashion before the flight home.

[Please note: As any reader of this article, casual or committed, will have guessed, this trip took place, and this story was written, pre-9/11, before the end of apartheid, prior to the fall of the Berlin wall and ahead of the eurozone.]

Click here to see Just my backpack, my daughter and me: Part 1

My daughter in Greece.

Monte Carlo in the summertime.

After climbing many stairs at a village on the Peloponnese coast we reach this belltower.

I share baguette and brie with a friend in Nice.

Not drinking it but impressed by the beer size.

My daughter salutes the affluence of Monaco.

At San Remo with a friend who joined us for a while.

On the beach in Greece with friends.

Brek with a friend in France.