Thailand travel 16. Chiang Rai to Chiang Khong and the Mekong 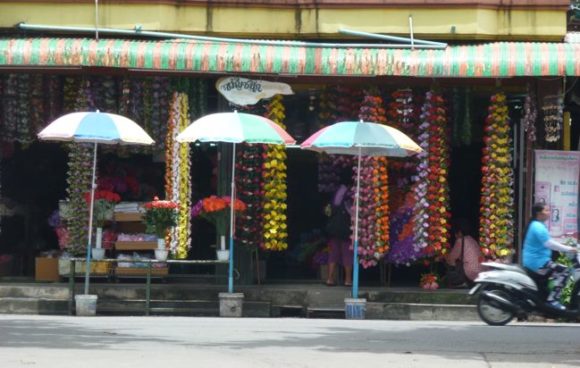 I have this all inside two double garbage bags lining the backpack.

Last night received WhatsApps from two friends back home about flooding and car wash-aways and house wash-aways and, no doubt, people wash-aways. A monsoon there, which is not meant to have monsoons.

My biggest monsoons to date have been when I am striding out, sometimes with backpack on and sometimes without backpack on, and I suddenly become a cloud of perspiration. Even carrying a patch of shade with my new reflective umbrella doesn’t make life cool. Well I guess it does marginally… And better than sunscreen. Although I do lather myself with a layer on the arms and face each morning. Then Tabard on the legs and arms too to be safe rather than sorry if any tropical bugs or mozzies happen to be hovering. To Yoddoi Coffee (coffee shop), where you can sit and look directly at the singing clock. I watch it strike 10. It does no sing or do its kaleidoscope of lights in the morning. I read online that Yoddoi is the name of the high quality Arabica Thai coffee and Thai tea, grown in the high mountain of the Chiangrai region.

The menu starts with Western offerings but why would I want bacon and egg and orange juice and a cappuccino for breakfast when I am in Thailand? A lot of people must, because there are six set price brekkers ranging from Bht190 to 220 and they are all for the same thing, with variations on how the bacon and egg are served.

Maybe if I was here for a few days I would have one. They do look good, especially the scrambled, with two slices of toast and a little salad. And the coffee is beautifully patterned.

I am thinking I would like to come back to this city, and explore this region, but this is my only “for certain” day here and even though I don’t feel like it or even am hungry, to tell you the truth, it is 9:30am and I order the pad thai for B59. And attempt to make it understood I will order a drink afterwards. The waitress has as much English as I have Thai. Non-existent. Fair enough!

Watch an ill-humored looking old farang guy walk in. Head down. Grunts at the waitress. Buries himself in his English language paper. He gets a fruit juice. Suspect he lives here. Don’t think I’d like to live here. Just spend a few more days — to explore. Working with weeds in Chiang Rai.

But now, time just for brekker and a long walk carrying my sunshade. The morning shower and fresh-dried hair soon gives way to the humidity. Don’t need a sauna here to look glowing.

Snap some shots at a flower market. A fresh produce market. Head back to pick up bags from The North. Then 90 seconds to the bus depot. A red bus this time. Local “milk train” bus. Three tiny ceiling fans. I head for the long back seat so I can put my backpacks in the large open area between me and the regular double row of double seats. The driver loads packages into this space that he will stop en route to deliver.

Three young women tourists get in, drop their backpacks with mine, then go find seats further forward. Bus filling up. Trouble comes with a strident voice and sits next to me. My initial friendliness becomes stony with prickles when I note he is unhinged. Smells of booze. A monk sits on the other side of him. Poor guy. The unhinged one spends the next 90 minutes of the two-hour trip fondling the monk, who withdraws his hand umpteen times and sits forward when “our guy” dozes off on his bare monk’s shoulder.

Finally a double seat near the back becomes vacant and the monk grabs the opportunity. He stretches out. Feigns sleep when the unhinged one tries to squeeze in next to him. Finally the unhinged one gets out, after trying his luck with a woman near the front, who turns her back on him, at a bridge by a stream in the middle of nowhere. Going to drown himself, I wonder? Those left on the bus appear to heave a sigh of relief…

After two hours those of us with backpacks get dropped in Chiang Khong, which is the kick-off point for the two-day Makong slow boat trip for me. For some, for hiking and exploring mountains, seeing hill tribe people and other activities.

Coming up — Thailand travel 17. Life and death in Chiang Khong by the Mekong

The clock tower by day.