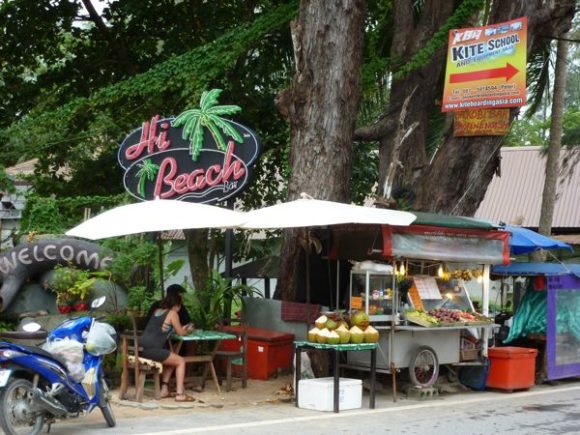 I get there in the dark. To Nai Yang Beach, that is.

Am shown to a room among a maze of them at the resort I’ve been booked into by the local Qatar Air representatives.

Conclude you could get lost here forever trying to find your way out, despite the tsunami evacuation signs pointing — not to reception, which is my quest (the restaurant I am booked for dinner at is right next to reception). Tsunami evacuation is one of the routes I try to get back there after being deposited and having dropped my bags in my booked room. Finally a young Chinese couple come to my rescue and physically lead me.

In the morning I read in my Lonely Planet that Nai Yang Beach is exceptional and part of Sirinat National Park. It is 15 minutes from the airport, but no plane noises to be heard.

To quote: “This is one of the sweetest slices of the island.” Lucky me! I see the kite school on my early beach walk.

I read the Hat Nai Yang bay is sheltered by the reef, great for snorkeling, surfing during monsoon season and kite surfing. (There was one (kite) out in blustery overcast conditions when I did a pre-breakfast walk.) Last night saw some of the ‘seemingly endless strip of seafood restaurants and bars.” Also massage shops and more.

So why here when I had my last supper (lunch) and last massage and had a plane ticket booked and confirmed?

Arrive Phuket Airport. Check board to see where Qatar Airways flight is leaving from. No indication. Ask someone. She says it’s canceled and directs me upstairs to an office. A dark office, and shut. I ask for help at the bright, open, Emirates office right next door. “Try knocking, maybe they’re inside,” the man says. He’s correct. The shut door to the dark office with the “closed” sign pushes open. Kites fly at the beach across from my resort lodgings.

I learn my flight was canceled not today, not yesterday, but about three weeks ago. Something about the non-delivery of a plane. Why did I not get a notification when they have sent me many others? And when apparently all but two people were notified. He, the other person who turned up, was put on a plane to Bangkok and who knows where, beyond that. Not to Durban, my destination, which only has a couple of direct flights a week. (Well, not really direct as they stop in Joburg, but you don’t get off the plane.)

But I am feeling like a satiated python after red curry duck lunch. And wet (from rain, the heat, the humidity) after my dash to the airport bus. The “good girl” in me sits in the semi-dark Qatar Air office at the airport and thinks, just do what they tell you.

Then the conscious part in me thinks back over my past three-and-a-half weeks. Do I want to be rushing from plane to plane and airport to airport? Rushed from airport to airport when I was anticipating movies and relaxation and a leisurely stop in Doha to explore the airport and a four-hour “guided bus trip” of Doha, as written about in their airline magazine, to see some city highlights?

And so I get to see Nai Yang Beach “What are my options,” I ask the three women, who, like me, are floundering around. Feeling helpless. Trying to sort things out when “this is not a booking office and the office in Qatar is shut,” they explain.

They offer me an overnighter at a hotel. I will fly early morning to Qatar. Makes sense. Until I ask them how long I will have at the Doha airport. They check. The flight they have booked me on arrives in Doha three hours after my flight out of Doha has left.

And so it is that, after um-ing and ah-ing and different suggestions and problems with the lack of frequency of Qatar flights to Durban, they say they will put me up in this resort place for a night if I pay for a second night, and I will fly out early the following day and arrive back in Durban on the same flight as planned, but two days later.

And so I get to see Nai Yang Beach. Just off now to explore more, maybe have another (better) massage and another last supper. I count my Bhats and have enough for both, just, without cashing in more money. Onward and upward!