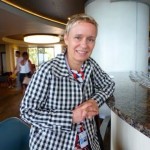 Documentary filmmaker Petra Epperlein’s Karl Marx City is a personal journey that takes her back to the East Germany of her childhood.

Why Sunshine’s Felicity Vonmoos is a good egg

Felicity Vonmoos has stuck her finger up more chicken a-holes than she cares to remember. Hey, she’s a good mom! “Nine times out of 10 if a chicken looks unhappy, it’s because there’s an egg stuck in breach position. I turn it, make it easier for her to lay. Then she dashes off to eat.” Hens are great little creatures, she adds. “They just ask for food, love and water and in return, they work really hard and earn their keep. They lay an egg a day.”

On the way to the wedding: on track—or off?

Traveling to island nuptials by train is fine. Not missing the ferry and the whole blissed out event is even …

Dawn rising and new moon just hanging out up there