Why Sunshine’s Felicity Vonmoos is a good egg 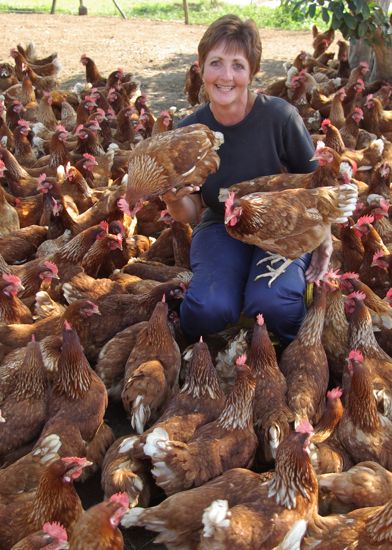 What came first—the chicken or the egg? So long as it’s a happy chicken, who cares! 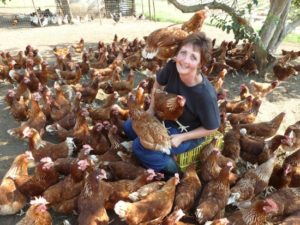 Felicity Vonmoos and her layers.

An earlier version of this story was published in the Sunday Tribune.

Once upon a time, not so many years ago, Felicity Vonmoos (with her husband Peter Vonmoos, who is in a sense periphery to this story and at the same time, key) decided to try farming broiler chickens. They did it for a while but it didn’t really work for Felicity.

“I hated the six-week turnover. That’s what it is for a broiler. Six weeks from start to cull.” It disturbed her. Wore on her.

Because the thing is, Felicity had realized she really liked chickens.

One balmy evening, sitting under an avo trees on the farm they’d bought at Drummond not all that long after they met (him divorced and her widowed) on a blind date in 1992, Felicity told Peter she had a dream. It was to have laying hens. “A neighbor up the road had laying eggs. He had them in cages. I thought I’d like to have hens like his but if I did, I knew I’d do it differently.”

Peter suggested she give it a go so Felicity got 25 laying hens six years ago to see if she would like it.
And, she says, it was love at first, um, lay. 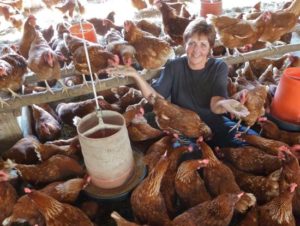 Felicity Vonmoos in a henhouse.

“Hens are great little creatures, just lovely to deal with,” she says. “You can build up relationships with them. They’re easy going. They don’t bite you. (Although they will shred a night adder or egg eater quicker than you can shout “snake”.) They just ask for food, love and water and in return, they work really hard and earn their keep. They lay an egg a day.”

After not much longer than it took for Felicity to give all 25 hens names, she decided she’d like to up the number to 500 and so Peter, by profession a hairdresser (“like most Swiss,” says Felicity; he has a salon in Kloof called Panache) got to work building his first indoor-outdoor chicken shed, designed with chicken-comforts and safety (from passing kites and opportunistic land predators) in mind.

That was the start of an egg-ceptional journey that now has Felicity providing many of greater Durban more taste-conscious restaurants with her eggs. Think Arts Café, Market, Ciao Bella, Bellevue Café, Café 1999, Unity, Quo and Makaranga Lodge to name some.

Felicity is telling me her story on Tuesday at Sunshine Farm, the property she and Peter moved to 18 years ago. It wasn’t a working farm then. There was one small shed and an orchard of orange, lemon, litchi, pecan and macadamia trees, which is still there.

It is a working farm now with 3,500 hens laying around 3,300 eggs a day and living in two pristine fowl-friendly rather than foul smelling (if you’ve caught a whiff coming from some of the chicken factory farms when driving between Durban and Maritzburg you’ll know what I mean) chicken condos.

Their sheds have large outdoor areas where they can forage, scratch and have their sand baths (things Felicity reckons no chicken should be deprived of). They have comfy grass-lined laying boxes. “They’re private about that. It’s an intimate thing. They’re very vulnerable while laying,” she says. 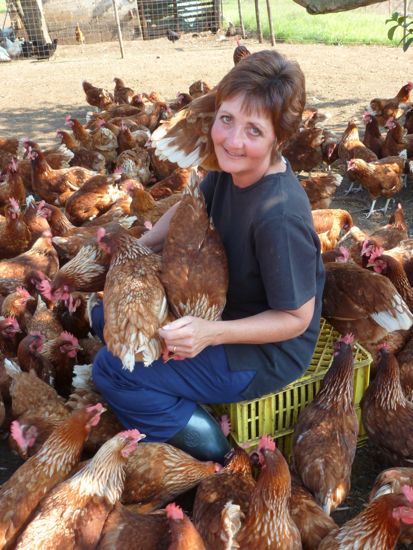 And some of them have names. “That’s Cleopatra,” Felicity tells me. “See the kohl around her eyes?”

“It’s a passion,” she says. “You don’t learn it. It’s there or its not there. I have a passion for these hens.

“Probably I feel about them like a mother would feel about kids,” she admits. “Very protective. And they are such nice pets. All these chickens to me are pets.”

Yes, I have favorites…

They don’t all have names but like a school teacher, she says, “while you might not know them all by name, you notice if someone is missing. Some are more stand-offish. Some are more curious and keen to interact than others. Yes, I have favorites.”

As we walk among them they make what sound like contented mellow clucking sounds. When one lays, you hear a more urgent clucking. “You see? She’s telling us!” says Felicity.

When she opens the hen houses before dawn in the morning she always checks to see if any are off colour. “When they stand with faces to the wall in penguin stance, I know something might be up.”

She has stuck her finger up more chicken bums than she cares to remember. Hey, she’s a good mom! “Nine times out of 10 if a chicken looks unhappy, it’s because there’s an egg stuck in breach position. I turn it, make it easier for her to lay. Then she dashes off to eat.” 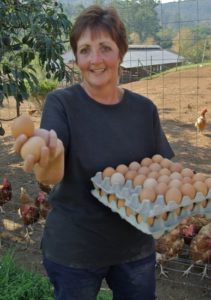 An article in Rapport last weekend told of an egg farm in Mpumalanga where thousands of chickens are living in overstocked cages, trampling and cannibalising each other. This is the fate of many chickens in SA and around the world.

“I don’t want to say anything about caged birds,” says Felicity. “I know they’re very necessary. It’s a cheap form of protein.”
But that doesn’t mean she can resist buying caged birds when she comes across them on the way to being culled. “I bring them home, cut their nails and let them loose in the garden. They usually can’t walk at first because they’ve never used their legs. And they’re frightened. But they quickly adapt.”

Sunshine Farm eggs are certified free range. She has an open-door policy. You want to go see her chickens, you ask her and she’ll invite you. “Any farm that says they’re free range needs to let you come look,” she says.

She invites school groups in. “If they learn while small what gentle little creatures these chickens are, they will respect them. Some children are scared when they arrive. After they’ve touched, stroked and fed a chicken, they want to take it home.”

She and Peter eat eggs. Their eggs. And chickens. Not their chickens. (Free range from Woolies, usually.) When their chickens die, usually from old age, they go to the crocodile farm in Botha’s Hill. “It’s the food chain,” Felicity says.

There is a growing consciousness amongst consumers about what they eat and Peter is currently building a huge shed with a surrounding free ranging area to accommodate another 2,500 hens. Felicity is not bothered, as she once was, that she won’t have a market. The demand is there already. People want good eggs.

Sunshine Farm eggs are sold at Bread the Artisan Bakery, Windermere in Durban and through some private suppliers at farmers markets.

She loves her chickens and gives many of them names.

Felicity Vonmoos in a henhouse.

Felicity Vonmoos and her layers.

Felicity Vonmoos has chickens that scratch and bath in dirt.

On Sunshine Eggs farm in KwaZulu-Natal.