Thailand travel 13. Was my inmate masseuse a killer or an addict? 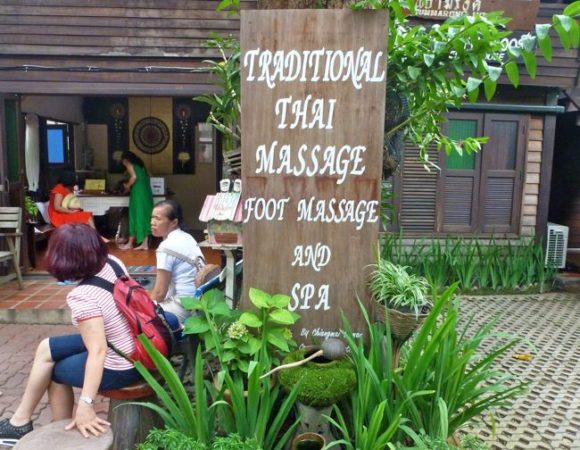 Outside at the correctional massage facility Chiangmai.

To backtrack: I read about it in Lonely Planet under the heading “Massage: Straight Up, No Chaser.” It tells me that the Vocational Training Center of the Chiang Mai Women’s Correctional Institute offers “fantastic massages performed by female inmates participating in the prison’s job-training rehabilitation program.”

Hmmm. I admit to some reservation and hesitation.

But it adds that “despite their incarceration, the ladies aren’t career criminals but eager to turn their lives around with these new job skills. Those working in the center are due for release within six months, and the money they earn is used after their release.”

OK. So, to cut a longer story short, I find the place. I spring 400bht for two hours from Mai, who looks 12, assures me in “sign” than she can do “strong” despite her stature. And after taking leading me to a throne-like chair, asking me to remove my shoes, rinsing off my feet in a tub and patting them dry, she takes me to a private room with two massage beds and leaves me to replace my frock with the light cotton baggy pants and top that seems to be the uniform for Thai massage. Portrait of a prisoner? In the facility garden.

Then no sooner than I am settled on my belly wondering which way to put my head as only at one place in Thailand did I get a massage bed with a hole for your face or head to settle into that I had thought was standard, she is on top of me. Elbows, feet, heels, hands, fists, full body weight at the ready.

You are instructed not to photograph the inmates and dialogue is out the question. But for the record, and again, keeping it short, I write afterwards in my diary that it was torture — rather, I imagine, like being on the rack. That each time I writhed and winced in agony, she laughed and went harder.

And that the crime she was doing her penance for had likely involved a victim and intense pain.

In jail for what?

Afterwards in the inmate massage center cafe (where a board reads WiFi code: Inmate Massage — password 053221233) I spot a woman in uniform at a desk. I go tell her I am a journalist and had a massage and does she speak English and can she please tell me what the women are in jail for?

She speaks at least two words of English because, with a smile, she shares: “Drugs, killing.” Then confirms that they are brought here during the day and after “work” are re-incarcerated: taken back to chink.

WhatsApp my friend, Bruce, that evening, in reply to his request for a travel update:

“This might amuse you. I went and sought out the women’s correctional institute today where the inmates get trained in massage. Afterwards asked what women were in for. Drugs. Killing. So the woman in uniform told me. They go back to prison at night. They come out with a skill… The artist I just returned from having dinner with, when I mentioned this, says it is well known that Thai women poison their husbands. Also, that the most famous penis attachment surgeon lives here as apparently Thai women get cross, often, with their husbands and snip them off… So travel does broaden the mind.”

Guess I will never know whether my masseuse was in for drugs, for killing — or maybe for giving someone the snip.