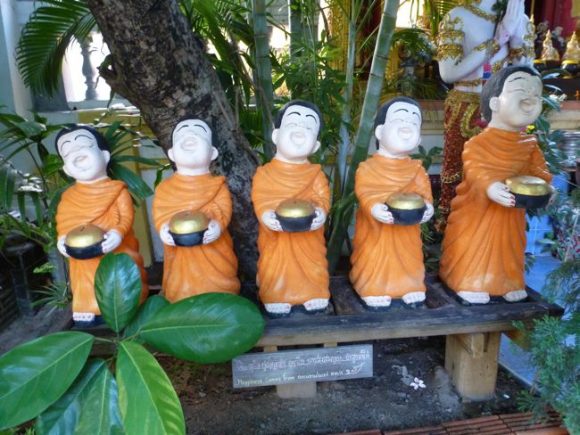 The swashbuckling mystery man from the tow path near Oxford writes, the night before I fly out: “You going to Thailand? On a whim? For four weeks? Wow. Well, if you find yourself in Chiang Mai or Chiangmai, you might want to look into the ‘monk’s chat’ option. You go talk to a monk at a monastery. It’s so they can practice their English.”

I consult Lonely Planet Thailand and sure enough. It’s listed there. Tells me what monasteries.

That is, after jetting in on my very expensive flight courtesy Thai Smile from the domestic departures section of Phuket airport where the words “mad” and “big crazy crowded fun-fare” and “what a mishmash of folk in what an awful mishmash of beachwear” writes itself as descriptions into my notebook, with an aside of: “not a criticism! Fun, alive and a trip…”

And after checking into Riverside House B&B, which I reach via metered taxi (Lonely Planet again) and which Elle’s friend recommended (and comes well recommended in Lonely Planet, but which I would not recommend, except for the location — once I have upgraded from a shitty side room that smells like an old smoker inhabited it before me to a bigger one I don’t need in terms of scale and the three beds in it, but it looks out over the River Ping. And who wants to move when you’ve “arrived” and want to drop your stuff, head out and explore.

On the plus side, strong WiFi. New Maslow’s hierarchy, someone posts on Facebook: add a tier at the base, below the need for food, drink, sleep, sex and the other basics. Call that tier WiFi.

See Thailand Travel 9 for more on the monk chat.

In the garden at Wat Chedi Luang, Chiangmai

The River Ping, my B&B view.