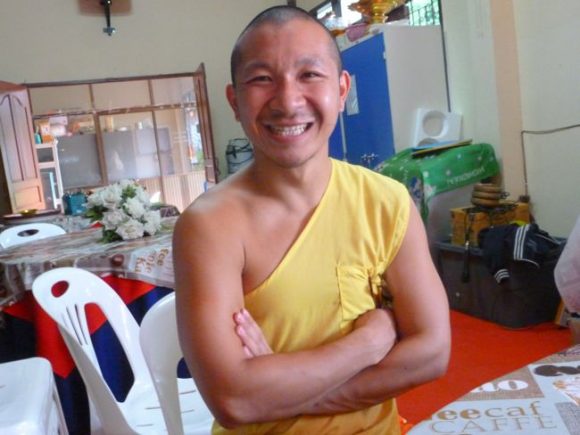 Dateline: Chiang Mai. I walk, walk, walk. Ignore the “tuc-tuc madame” constant. In and out of here. Stopping there. A shot of this. Wonder at that. One of the joys of solo travel. Nobody to say “Where are we going?” Or “Are you sure this is the way?” Or “You’re sweating you know.” Of course I forking know I’m sweating. And who cares really where you’re going with a new city to explore because when it’s all one big adventure in sights, sounds, smells, tastes if one stops and indulges (icy things called for) and novelty.

But good to have some sort of headed-to point.

And mine is either Wat Suan Dok or Wat Chedi Luang temple. Whichever I find. Puzzling over the map. Knowing it doesn’t really matter. On the other hand, this monk chat idea is a magnet.

And after probably a couple of hours of wandering and stopping and taking pics I find myself at what seems it could be Wat Chedi Luang. Funny little monk statuettes to smile at. Garden well tended. Lots of temple structures.
I look for a monk. See one inside one of the structures. Outside, in the garden, there is a massage area.

I am looking for a monk to chat to Envy as we watch the good foot massage in the temple grounds.

I shake my head. No.

“I am looking for a monk to chat in English to,” I say, moving on to a young man in an orange robe, having no clue if he will understand.

He leads me to a little table with chairs, inside. Turns on the fan and directs it at my wet and wilting form. To date the only monsoon I’ve seen is me monsooning; walking in the heat and humidity.

I am not sure what’s going on but then someone sits down. A young man. Thin as a stalk of asparagus. Smiling. Yes, I can speak to him. He is not a monk. He’s a novice. He’s at university. He’s learning English.

His English is broken, but OK. I have been surprised at the unselfconscious lack of English to date.

“Thailand has never been colonized,” the young man explains. Guess a self-confidence comes with that. Of “just being Thai.” In the garden at Wat Chedi Luang, Chiangmai

He says here in Thailand they belong to the Theravada school of Buddhism. Asks me if I know anything about Buddhism. I tell him I lived for three years at the San Francisco Zen Center. Have meditated for many.

Says he’s from the country. A rural area. He gets to live here at the monastery and go to university. He says he probably will be a novice until he becomes a monk. Then at some point he will most likely leave the monastery. He wants to improve his English.

He wears sunglasses perched on his shaven head

Then another monk arrives and he hands over his place.

This is a real monk. Beyond a novice. He wears his sunglasses perched on his shaven head. We talk about meditation. We talk about his studies. He is also at university.

Will I send him the picture I take when he says, yes, it’s OK that I photograph him? He gives me his email address. He says his parents weren’t that keen he came to live in the monastery but he is getting a degree and learning English. Then he, too, will probably leave the monastery. Although he may stay on and travel and teach the dharma. But he thinks he wants to marry one day.

“Things change,” he says. “Everything changes.”

I check on Google and see on the Buddhism in Thailand link that the monasteries play a significant role in education; that young boys help out sometimes in temples and get schooling; that it is not the norm to stay in the monastery forever, although some do.

And you get a sense this is just all OK.

When we part, I see a woman masseuse engrossed in giving a foot massage (reflexology). It’s a temple-ground thing. A special area with seats.

Engaged with another pair of feet

Seems like a good idea. To relax in the shade, rusty old fan turned to high, get the treatment.

This is how I meet a Greek woman who introduces me, when we bump into each other by chance the next night, to using bookings.com, which I know of but have never used, while on the move.

But now, we bond in envy because the woman we have both watched give a foot massage is engaged with another pair of feet.

We, on the other hand, both get women in dire need of mindfulness training from the monks.

Which is why we both sigh and suffer through an apology for a foot massages. Enviously watching the good foot masseuse in the temple grounds. Creating our own suffering wishing things could be different.

Next: Thailand travel 10 — To market, to market in Chiang Mai

Food on the move en route to the monastery.

Where I find the English-speaking monk chat monks.

Another part of Wat Bupparam on Th Tha Phae.