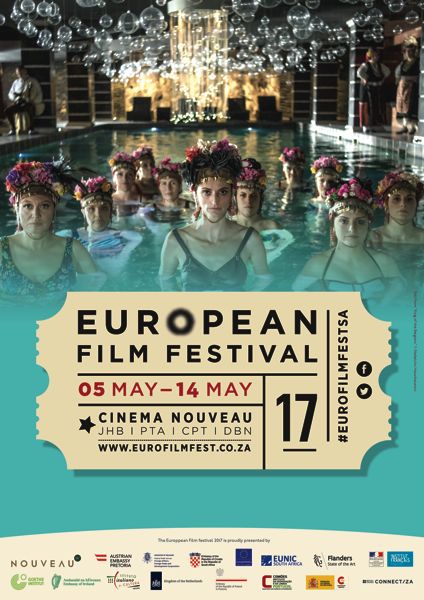 The fourth European Film Festival (2017 edition) for South Africa will screen at Cinema Nouveau in Durban, Cape Town, Pretoria and Johannesburg over two weekends between May 5 and May 14. The films include award-winning entries from 12 countries:

(Durban’s Gateway Nouveau is now located at the Ster Kinekor Complex, upstairs from the old Nouveau.)

Each film screens only once in Durban.

Here are the dates and times for Durban. For other cities, visit the Euro Film Fest website www.eurofilmfest.co.za

Click the movie links below to get a good bit of information on each film.

Connect with the festival on Twitter and Facebook: #EuroFilmFestSA. Booking is now open. Tickets are priced at R64. To book see www.cinemanouveau.co.za or www.sterkinekor.com. A still from King of the Belgians.

Festival Director Katarina Hedrén, curator for the second time, says: “With this year’s selection, which includes films of different genres, textures and moods, the aim is to entertain, amuse and offer opportunities for reflection, new discoveries and recognition.

“The theme binding the films together is cinematic excellence through acclaimed and award-winning films from 12 European countries.” From the Polish film Spoor.

The 2017 selection is a mixed pot in terms of film themes, which span from animal rights to family dynamics. Dramas and documentaries, comedies, tales of grief and a children’s adventure sit side by side on this eclectic program.

“The films are new, but the commitment remains the same: to offer audiences in South Africa an opportunity to experience acclaimed and award-winning European cinema,” adds Hedrén.

Each film reflects the skills and take on the world of film-makers who are not limited by national borders. And so, American Honey, an award-winning British-made road movie set in America’s mid-west, is as much a magical mystery tour into Americana as it is a coming-of-age drama, she says.

King of the Belgians is a comedic piece coming out of Belgium, which sees the Belgian king and his entourage crossing the Balkans in a madcap adventure, after learning of a coup back home. Acknowledged by the Rotterdam International Film Festival, this movie is a road trip with a difference, at once thoughtful, hilarious and wild.

Strike a Pose is a Dutch documentary exploration of “Madonna’s men”—the male dancers who served to consolidate the pop icon’s message and status as an outspoken advocate for LGBT-rights. This winner of a jury award at the Key West Film Festival is an unrelenting documentary which exposes new aspects of a well-known story. From the German film Tony Erdmann.

Germany’s Toni Erdmann is the outlandish tale of how the passing of a family dog sets off a series of events with a major impact on a father-daughter relationship. Touted as an academy award winner for best foreign film in 2017, I saw the preview and found it funny, thoughtful, sexy, outlandish, real—and well worth watching.

Read a UK Guardian interview Pokot (Spoor) reflects divided nature of Polish society with three-times Oscar-nominated Polish film director (of Spoor), Agnieszka Holland, who has said her first foray into murder mystery had accidentally turned into an allegory of the divided society her native Poland has become under its populist nationalist government.

If you want help decided which films you want to link to, above, to learn more about, here is a brief summary of each of the 12 films that will be screened at the 2017 European Film Festival 2017 South Africa: A still from Strike a Pose. Another still from Palka or Spoor, the Polish film.

“European film-making has seen another year of highly creative output, and film-makers continue to produce works that challenge and uproot. We are happy that Festival Director Katarina Hedrén’s 2017 film selection has given even more variety to the European Film Festival,” says Norbert Spitz, Director of the Goethe-Institut, on behalf of the European partners.

How the festival came together

Bookings are now open. Tickets are priced at R64. To book see www.cinemanouveau.co.za or www.sterkinekor.com.

See you at the movies.