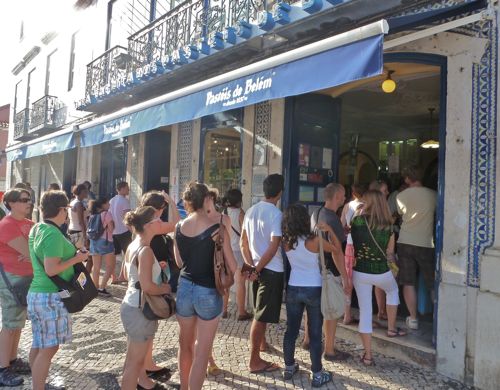 Portugal is known for its pastries. The most famous is the pastéis de nata. Lisbon is where you’ll find the world’s best.

A version of this story was published in Sunday Tribune Travel It was on my first afternoon in Lisbon that I discovered the best place in Portugal—likely in the world—to sample their most famous pastry, the ubiquitous pastéis de nata. And my thoughts turned immediately to Sister Liguori, the Holy Family nun in charge of the kitchen at my old boarding school, Maris Stella, in Durban, South Africa.

My abiding memory of Sr Liguori was seeing her chunky frame and ruddy face sweating over large cooking pots in the sweltering heat of many summers, making us what were possibly nutritious though distinctly uninspiring meals. We were not meant to squash what we couldn’t stomach between plates to hide what we hadn’t eaten, but we did.

And I’m sure I’m not the only one who remembers Sr Liguori standing in the dining room hot and bothered (hell on earth, her job seemed), her habit pinned up to facilitate movement, taking a hearty spoonful and chewing and swallowing with theatrical flair when we complained of weevils in the porridge, and saying “a little bit of protein never harmed anyone”.

How would Sister Liguori have fared in Portugal back in the day, I wonder? Carla Macedo, a culinary tour guide specialising in Lisbon’s sweeter side, from Lisboa Autêntica!, has told us many of Portugal’s famed pastries were invented by nuns when, back in the 1800s, young women from rich families, with little chance of inheriting, were dispatched to the country’s more than 300 convents. With nothing better to do, the story goes, they hung out in the monastery kitchens, experimented with recipes and were responsible for many of the more than 200 varieties of biscuits, cakes and pastries, known collectively as doces (sweets), found in the multitude of pastelaria and confeitaria that are a feature of every Portuguese neighborhood.

Apparently the egg yolk became a central ingredient in Portuguese baking (the best pastries are often creamy and custardy) because the nuns used so many egg whites to starch their habits that they had to do something with the yolks.

Not a day went by during a recent month-long Portugal expedition that I didn’t stop in at least a couple of times for a coffee and a pastry.

At first I often went for pastéis de nata, the miniature baked custard tart, sometimes called “the archetypal Portuguese pastry” — versions of which have made their way into cafes, pastry shops, tea rooms and supermarket bakeries in countries around the world.

But by Lisbon, my last city stop on my journey, I had pretty much given up on them, finding them too sweet and softly pudgy and wondering what all the fuss was about.

A luscious and distinctive treat Little did I imagine that the definitive version was a luscious and distinctive treat, different as chalk and cheese from those baked en masse and sent to outlets around Portugal. It was a chance discovery, as the best ones while traveling often are.

The afternoon I arrived in Lisbon, having walked the streets and finally found comfy and affordable digs in the happening Baixa-Chiado district, and with an all-day transit pass I didn’t want to waste, I randomly jumped aboard a bus that would take me to the Belém ) neighborhood.

And a couple of doors away from this, near-neighbors with a Starbucks, a huge throng of people queued up, chatting and jostling to get into a blue-awninged café.

“What is this place? Why are you all here?” I ask nobody in particular, scanning the crowd for anyone who speaks English and is prepared to answer.

“For the pastéis,” a woman says. “This is the place to buy them.”

Turns out this is Café de Belém—better known as the Pastéis de Belém—the place the original version of the famed pastéis de nata dessert was created more than 200 years ago.

The website (pasteisdebelem.pt/) tells us is that when the Monastery of Jeronimos a stone’s throw away (along with all convents in Portugal) was shut down as a result of the liberal revolution of 1820 and clergy and staff expelled, an enterprising former monastery resident decided to bake and sell pastries from an adjoining sugar cane refinery and general store. And so pastéis de nata were born. You can stand in line and purchase “to go” from Café de Belém or you can sit down at a marble-topped table in one of several rooms decorated with Portuguese tiles and jammed with locals and tourists enjoying pastéis and other items. If you don’t want coffee or tea, you can order from shelves lined with bottles of sparkling wine—all the while relishing the aroma wafting from massive trays of warm tarts.

I stand in line and order four. The come perfectly packaged in tube-shaped take-out box. And when I bite into the first, unlike those I ate before, I get to relish the heavenly flavor of light and crispy golden pastry nests—with just enough salt to cut the sweetness—filled with a seductive mouth-filling custard that’s warm, melt-in-the-mouth creamy, decidedly less sweet than those sold elsewhere and topped with a subtle dusting of icing sugar and cinnamon.

Pastéis de Belém, which has been in operation since 1837 using the same closely guarded recipe apparently known to only a few hands-on master chefs, is the most-frequented pastry shop in Portugal. It’s a tourist draw, but also the spot to go for locals who know there’s no place better to enjoy their much loved pastries.

I wonder if Sr Liguori would have invented something sweet and scrumptious had her purgatory not been a bunch of precocious kids. If she had a sweet tooth and she’d tried a Belém special, who knows, maybe she’d have thought she’d died and gone to heaven.

Google “pastéis de nata recipe” to make them at home.

Spot the blue awnings of the famous pastry shop.