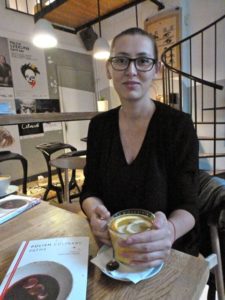 Magdalena Tomaszewska-Bolałek: Japanologist, Warsaw culinary luminary, fashionista, journalist, lecturer (plus, plus, plus) is an authority on Polish cuisine and author of the award-winning Polish Culinary Paths, published in March 2016. The book’s success has seen her take several culinary paths herself these past months—to China, south-east Asia and elsewhere: to share the delights and history of the Polish table.

We meet her at Craft Beer Muranow Piwny Swiat, a cool and arty neighborhood hangout with lots of wood and naked brick—and tea or coffee if you’re not ready to try their beer selection (like early afternoon and straight from lunch)—near the Museum of the History of Polish Jews (Polin). Magdalena, who has something with lots of lemon that looks as healthy as she does (unbelievably!) tells us she studied fashion, journalism and Japanese—and subsequently transitioned into food. She describes herself a Japanologist. She explains that this is the degree she read for because of her interest in Japan, which came via art.

She met her husband when they were both studying Japanese at the University of Warsaw. They work together on Japanese-related projects. (Her previous books are Japanese Culinary Traditions, Japanese Sweets and Zodiac Animals in Japanese Culture. She also has a blog with her recipes and feuilletons: Kuchniokracja.)

On top of all-of-the-above, Magdalena describes herself a food anthropologist and historian. She has studied biology, including the science of taste and the connection between the senses and taste. She has the distinction of having launched the first post-grad course in Poland in food studies, marketing and gastronomy, at a private university in Warsaw. (She is head and founder of the post-graduate Food Studies course at the University of Social Sciences and Humanities in Warsaw.)

When we meet her, she is just back from a China trip where she was promoting Polish food. 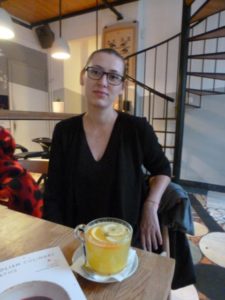 She is big on food and culture and their interconnectedness. All pierogi, she says, came from the Chinese (rooted in/inspired by their dumplings/jiaozi).

“Carp is a traditional fish here in Poland. Eating carp on Christmas eve is a newer tradition. There is also a superstition. We have to keep a (fish) scale. Every member of the family must have one. You put it in your wallet and you will have money.”

Similarly in Asia—specifically China—carp are lucky, she says. “They represent happiness and money.

“We Poles and the Chinese both love carp. We both have superstitions around carp. When they (the Chinese) are told, as they usually are, how different they are in terms of their cuisine, they close off. They love it when they discover we have things in common. When we can look for where we overlap.”

Magdalena explains that in Asia, food has traditionally been treated as part of the culture. By way of contrast, in Poland and in much of Europe, the cultural aspects are often negated. Culture, as much as anything else, can involve religion and belief systems.

So, for example, “Chinese people and Polish people both like pork. It is the culture that makes for the differences in how the pork is prepared and eaten. And Jewish people don’t eat pork at all.”

Aligned with this, Poland being predominantly Catholic has Lent, where typically you couldn’t eat meat for a period (and for a long time Catholics didn’t eat meat on Fridays). A consequence, Magdalena says, is that “lots of effort was put into how to prepare fish in extraordinary ways.”

And bread. “In the Catholic mass, bread is the body of Christ. Bread, as a consequence, is typically treated with respect. My mother and grandmother would never throw away bread. It was better to buy less and run out than to throw any away. And bread is significant in Poland. Every region has its own bread.”

Her book, Polish Culinary Paths, was a collaboration with the Polish Ministry of Foreign Affairs and geared to culinary tourism.

This is one of the reasons she loves Asian street food. “And food must be about fun and pleasure. You want to give pleasure for those who will be eating it. Who you’ll be sharing it with. You’re mad at your husband, you put too much salt in the food. Food is associated with everything from people dying to children being born to celebrations.”

Her favorite Warsaw restaurant, where “without hesitation” she takes people overseas visitors, is Solec 44. “In my opinion they have the most creative food in Poland. It is close to the Chopin Museum.”

Looking back, she says for the first 20 years after the end of communism, “we Poles were learning and finding our way. Things like McDonalds, we saw as freedom. Also, international cuisine. There were, in fact, not many products available in Poland during the 70s and 80s.

“Then 10 years ago things changed.” And the Polish culinary renaissance, an exciting culinary canvas in process,  began.

Before we reluctantly leave Magdalena, whose enthusiasm and depth of knowledge are riveting, she gives us each a copy of her book, Polish Culinary Paths. I have subsequently watched, via Facebook and Instagram, as the book has notched up awards for its author. It is essential reading for anyone interested in Polish culture and cuisine.

I meet up again with Magdalena on my return to Warsaw, before traveling home, a month later.

I have been told by several people that I must visit the new and trendy Hala Koszyki, which roughly translates as Basket Hall. At the time it has only been open for a month. I stroll there from the apartment I am renting, near the main train station and the landmark Palace of Arts and Culture.

It is not my best day. I have spent half the night—at least the time between midnight and 6am, given that one does not want to waste precious “exploration time” sleeping when traveling—feeling nauseous. I have forced myself to bus across town to explore Francuska Street—which I had heard was a “locaI” neighborhood worth visiting. Who knew when I would get back to Warsaw? It is often “now or maybe never” when traveling.

I am not up to joining Magdalena for sushi at a trendy-looking Japanese joint in Hala Koszyki where, not surprisingly, she knows and chats to the owner/chef. Not even for the large salad she eats later. I can only manage the equivalent of a soda and an apple juice made from Polish apples. Naturally. As she writes in her book, on apples: “…for centuries apples have played an important part in Polish cuisine and culture… One interesting fact is that Poland is a top apple exporter in the world… The apple and the apple tree are two important symbols of Polishness…”

She carries on to describe their role in Polish poetry, in Catholicism, in love, happiness, health—and death.

As I sip my apple juice she regales me with more tales of Polish food. Of her Japanese studies and interests.

She tells me that people go to restaurants in Warsaw—specifically, some of the trendy restaurants at Hala Koszyki—to announce (via Facebook, Instagram, Twitter, etcetera ) “I was there” more than for the food.

Hmm. A worldwide phenomenon? Or another Polish culinary path?