Trains and Lady Bird and Greyhound: an adventure 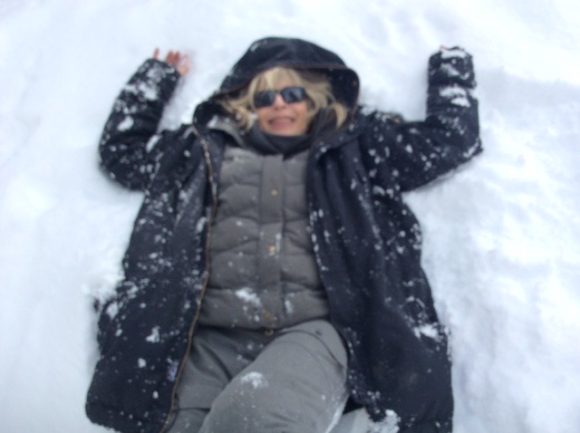 A snowstorm whites-out the highway. Do three solo travelers, abandoned in Sacramento, abort their respective journeys—or unite and make a plan? 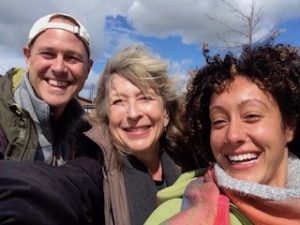 Sloan, the author and Nina in Sacramento.

SACRAMENTO. Lady Bird. Gotta get out!

This becomes literal when our Greyhound bus stops at the Sacramento Greyhound station and the bus host says this is the end of the line for us.

They will take everyone back to Oakland—maybe other destinations, but Oakland for me, given it was my set-off point. The road, they say, is snowed in from Colfax. Visibility is zero. Continuing is not an option.

The ciggie-smoking ladies from the bus who were headed for Reno seem resigned. Quite jolly, in fact. 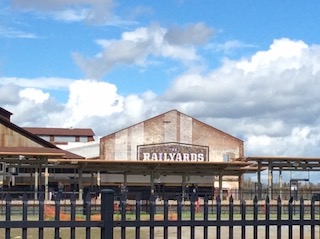 View from the Sacramento train station.

Me? I wonder: can this happen? It seems not possible. But yes, clearly it can happen, because it is happening.

“Should I take my bags off?” I ask in disbelief. We had previously been told the driver would change. That there would be a stop in Sacramento. Then we would continue on the same bus.

“Yes,” the hostess lady replies, seemingly unperturbed. A bit annoyed—at my questions—if anything. “Go sit inside. We will announce what is happening when we know.” 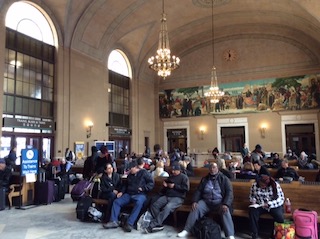 Inside the grand Sacramento station.

“Are you going to Truckee?” I ask a willowy young woman wearing a green fleece. She has a halo-like cascade of dreadlocky curls and a nose-ring and looks like she is perhaps a skier. Fit. Glowing with health. Definitely not one of the Reno-bound brigade that jumped off for a smoke in Vallejo and returned exuding choke-making wafts of nicotine.

She is, she says. She’s looking at the train schedule. But there’s only one a day. It will depart in a hour from the Sacramento train station, which is not walking distance. And it is sold out, the entire train, save for a family room that is going for $600.

Oops! A steep hike from Greyhound, which was, what, $39 one way—or $42? Something like that. But then it bombed out on us. Just like that… No warning. And still no announcement…

“How many can it fit?” I ask, before leaving my bags with her and heading for the loo, calling back “I’m interested if you can find a way to get us there.” 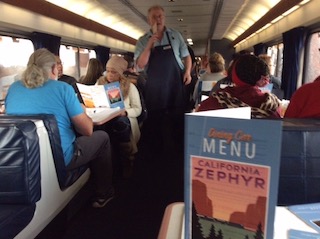 In the dining car, California Zephyr.

My phone is on “roamon,” which is my international travel setting. Means I can keep my same number anywhere in the world, jump on WhatsApp whenever on WiFi, and when not, send and receive text message, anytime, for a reasonable fee. But I can’t do what she is doing when I get back from the loo. That is, make calls—and have patient, long, detailed conversations.

Patience. It’s something I like to think I have. But when the pressure is on, it is something that can fly out the window. It can take great self-management, and sometimes, given the emotional volatility that seems to be my default, no matter how hard I wish it were not, only when I consciously collect myself does the patience virtue return. Often after the fact. 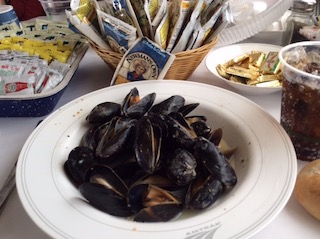 She continues talking for probably 15 minutes. Talking whoever is on the other side into certain agreements. Patience. Persistence. “Can we share?” “Is there nothing else?” “What time will it leave?” “How much to Truckee?” “And to Reno?”

She covers the phone to tell me there is a third person interested in making a plan. She points to a guy wearing a white baseball cap. He’s sitting a way away, on the floor, leaning on his luggage. Also talking into his phone. But then he gives up on whatever conversation he’s been having. Comes over. Squats down. Joins us.

She, meanwhile, is persisting. She asks for my name. Spells it out to the person on the other end. She asks for his name. Spells that out. She has agreement that we can each pay on our separate credit cards when get to the train station, which we will do by Uber or Lyft. Not a problem… 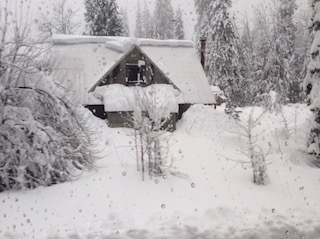 And amazingly, magically is how it feels, I find I am booked with these two strangers on the only mode of transport, it would seem, available to take us where we want to go. Some idiosyncrasy of solo travel; fate; luck; the elements—has brought us together. She is Nina. He is Sloan. He is going to Reno. We have each paid $3 extra so he can get to his destination.

Sloan summons the cab. We pile in and set off for the rather grand Sacramento train station. Lady Bird. I think again of the movie. One of my three fave 2018 Oscar contenders. Sacramento. She had to get out of this place. Now we have to. Funny.

“Have you seen Lady Bird?” I ask my new friends. Neither have. I give a synopsis. Tell them about the Saoirse Ronan character. Her Sacramento desperation. Both say they will check it out. 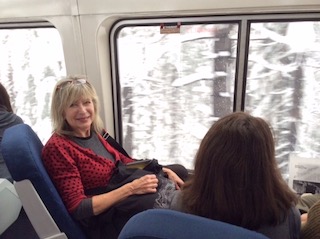 At the station we do the three-way bill-pay.

We will get lunch or dinner, depending on when the train arrives. Turns out it is still waiting in Emeryville. Expected to depart from there soon. They’re clearing the snow off the tracks up ahead, where we’re going. Today is not a day for timetables. It is a day for adaptation.

“Make sure you order the most expensive thing on the menu,” the train person helping us says. “It’s included with the ticket price.”

(We get lunch. Late lunch. And most pricey—and appealing—is the mussels dish. Side salad thrown in.)

I message Sherry. My cousin. Sherry McConkey who lives in Squaw Valley. Olympic Village. Location of the 1960 Winter Olympics. 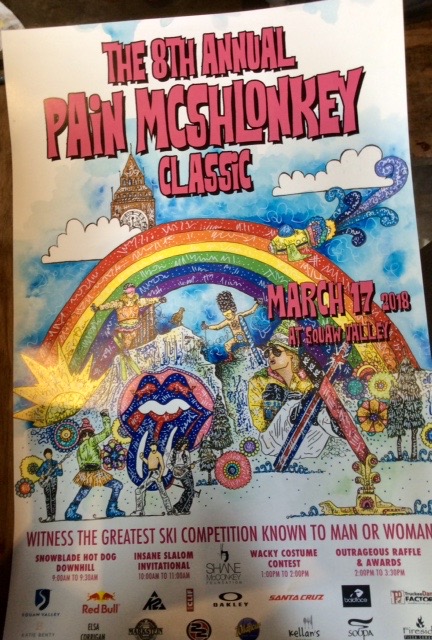 Sherry, who stole the show at my wedding, a couple of divorces ago, as an adorable four-year-old flower girl. Sherry, whose mom, Gill, was my mom’s flower girl—who knows how many centuries ago? The plan is for Sherry to pick my up in Truckee and take me to Squaw. She lives there. Has for years. She’s comfortable with snow tires. Chains. What people who live there do.

This weekend she’s organizing the Shane McConkey Foundation annual fundraiser and gala—or should that read Pain McShlonkey Classic? Both apply, I guess. Shane McConkey is Sherry’s late husband. A pioneer of freeskiing and ski-BASE jumping and a ski-design visionary—also known for his irreverent humor—Shane died, aged 39, following equipment failure during a ski-BASE jump in March 2009 while filming for a Red Bull project in the Italian Dolomites.

Sherry’s mom and dad are visiting from South Africa, as I am. Last time I saw them, other than on Facebook, was at Shane and Sherry’s Donner Lake engagement party—hmm, would that be 14 years ago? I did see Sherry and Shane together once after their daughter, Ayla, was born. The next time I saw Shane was at the Durban Film Festival, in McConkey, the legacy film made after his death.

“Come up for the weekend,” Sherry said when she calls me after seeing on Facebook I’m in Oakland for a visit. “My folks have the spare room. You can sleep in Ayla’s room. We’d all love to see you. And you can keep my mom and dad company.” While she’s out and about running things. “It will make me feel better.” 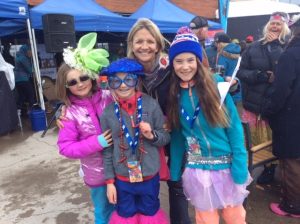 But first, we gotta get out of Sacramento. California’s state capital. “America’s farm-to-fork capital,” a magazine called Inside the Grid I pick up at the station declares. Where Jerry Brown hangs out as governor and where Arnold did before him.

And now there are the three of us. Nina, spiritual and wonderful and a seeker and an adventurer, as it turns out when I ask about her telephone equanimity and focus. She does sound coaching, she tells me. Seems apt, given the focus with which she engaged in that cellphone conversation. She is on her way to see her “love” of one month, she confides when we finally sit down, at the station, and formally meet. “Do you think I’m crazy?”

Crazy it would be not to, perhaps? 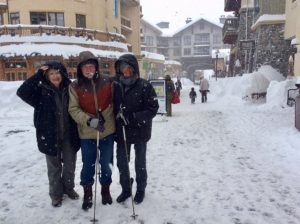 Jill and Paul Smulders with the author.

Sloan is on his way to a guy-reunion. He’s meeting old friends traveling to Reno from somewhere north. Sloan, who cycled across China, has been to South Africa and done a gazillion adventurous things. He tells us he’s left his wife and three kids in Marin for the weekend. He and his buddies will re-bond over ball-games. Something like that.

Me? I am back in the Bay Area from the subtropics of Durban. Summer in Durban. The Bay Area where I lived for 25 years—and like to live. Where, thanks to some weird mistake, perhaps, I am not living now. Only child: family demands, in a nutshell.

Now heading for Squaw and snow—with no snow gear. But to a household that will have this in abundance. Knowing this weekend will work out, somehow. Life’s like that, isn’t it? Always does. Has to.

Trains and boats and… 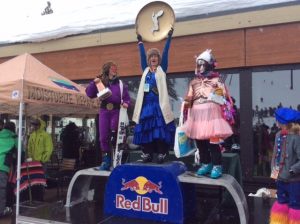 “Trains and boats and—no planes,” says Sloan, who just today has been on a ferry, in a car, on the bus, in a cab—and now, when it finally arrives, the train. An adventure we never anticipated. Aboard the California Zephyr, bound for Chicago, stopping en route, as luck would have it, in both Truckee and Reno. It is one of California’s scenically gorgeous train journeys. I know, because I did the trip once-upon-a-time previously, that time intentionally: when taking the train from Oakland to New York City.

“That’s cool,” Sherry texts when I send her the change of plans. “Let me know the arrival time, when you know. My friends will pick you up.”

We will sit for hours in the train on the tracks waiting for the clearing of the snow. Enjoying the observation carriage. The dining carriage. Wishing we had more time to enjoy our special little suit. Marveling at the snow. Taking pictures and videos of the snow. Feeling lucky… 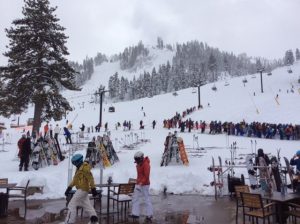 Our powder day at Squaw Valley.

It will be about 9:30pm, the dark and the snow illuminated by the night lights, about 12 hours later than our Greyhound ETA, that we pull into Truckee.

Better late than never. With a story to tell. And new friends.