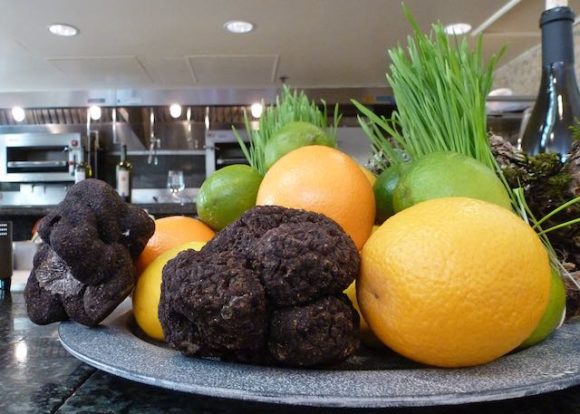 First item on Chef Nicola Chessa’s menu (and therefore ours) is citrus-marinated Arctic char (imagine the freshest salmon sashimi) dotted with balsamic reduction and anchovy pesto topped with a generous mound of fresh black truffle shavings. Next, there’s delicate chickpea pancakes, cooked golden in a pan scored with prosciutto, the pancakes then filled with foraged forest mushrooms, butter, cream and truffle shavings, covered with foil and baked “allowing the scent from the truffles, the butter and the cream to hug and kiss each other and make love” — to quote the chef.

The presumably sated lovers, their coupling complete, are topped with another mound of fresh truffle shavings before they come to us.

As the yolk of an egg pairs perfectly with fresh truffle, our next course is just-made Kurobuta pork sausage sliced into a soft polenta topped with a poached egg and yes, another mound of freshly grated Périgord shavings — the $800 per pound truffles brought in from Italy for this year’s Napa Truffle Festival, the backdrop for the lunch I’m describing.

For dessert, we get elderflower ice cream, fresh berries and almond and truffle chocolate — with more fresh truffle shavings, naturally. And each course is paired with, as you might expect, an award-winning Beringer wine. (A private reserve Chardonnay followed by two award-winning cabs — then Beringer’s raisiny Sémillon/Sauvignon Blanc botrytised Nightingale with dessert.)

So why should we care about the Napa Truffle Festival?

Sooner rather than later and most likely within the next five to ten years, when you order a truffle dish in the United States — a famous “black diamond” Périgord truffle dish, which now requires your truffles to be flown in from Italy (although one scientist-turned-farmer in Tennysee is currently growing them successfully on a relatively small scale) — the truffles may well have been locally grown and harvested.

The method behind the (third annual) Napa Truffle Festival madness, namely the American Truffle Company and it’s co-partners, Stanford MBA and engineer turned truffle entrepreneur Robert Chang and British environmental and truffle scientist Paul Thomas, is the propagation of the Périgord. And not only in Northern California wine country — vineyards are often perfect for truffle-growing, they say — but worldwide.

ATC (with Chang and Thomas at the helm) is currently involved in truffle growing partnerships and research in 23 countries — from Finland way up in the northern hemisphere to South Africa and New Zealand way down south.

Leaping forward to a beyond-the-best-case-scenario outcome, if successful in their mission, which is to develop truffle farming partnerships and support truffle farmers wherever conditions are optimal for cultivation, we could all soon be buying, eating — or growing — a great many more truffles than we are now.

“Think of truffles as underground mushrooms that attach themselves to the roots of a host plant,” Chang told the crowded 2013 truffle fest opening party held at Chef Ken Frank’s La Toque restaurant at the Westin Verasa in downtown Napa and attended by Michelin chefs, scientists, truffle experts, would-be truffle growers, current growers, media, foodies who had flown in from around the country to attend and plain old truffle fans.

Gretchen and Dale Demmim, in a collaborative partnership with ATC, have planted three acres of their plot in Lovettsville, Virginia, with 750 English oak and hazelnut trees provided by ATC, the roots inoculated with truffle spores. Three years into the enterprise, Gretchen says they hope to harvest their first truffles in another two to four years. And they anticipating leaving a lucrative truffle orchard as their legacy to their children.

Your first date with Angeline Jolie

Colman Andrews, co-founding editor of Saveur magazine, was keynote speaker at what was the third annual Napa truffle fest.

Andrews is proof that a refined palate does not have to be born that way. “I never grew up in a gastronomic atmosphere where wine was celebrated and great food put on the table. My father made money writing screenplays. My mother couldn’t cook. So they went out to restaurants a lot and they took me.

“What they ordered was pretty ordinary,” he says. “And when I was about 13 I had a revelation — that beef wasn’t grey inside. One of the few things my mother made — besides unfreezing and opening cans — was roast beef. She’d open a can of potatoes and put that in the bottom of the pan along with peeled raw carrots. She’d put this big round roast on the top, crank heat up and put it in the oven about four hours. The potatoes and carrots were great — leathery. The meat would come out about the same color as the pan.

“Someone once asked me what the weirdest thing was I’d ever eaten. I said ‘canned spaghetti.’ We had canned mushrooms that made your teeth squeak. My mom’s secret ingredient was canned corn. People have fond memories of mom’s apple pie; whatever. Mine was Aunt Jemima pancake mix with canned corn. My mother would rather have put ground glass in baked potatoes than chives. I grew up with what I guess you could say with a bland palate.”

His horizons expanded, he says, when he went to college. Then a good friend went to live in Rome. He visited. And among other things, discovered truffles. In the first instance, white truffles.

“That’s like your first date being Angeline Jolie. It’s a hard act to follow. I was maybe 26 when I tasted them. People say white truffles are sexy and they were. Sexy and mysterious. Also delicious. Do you know, it’s against the law to carry white truffles on a bus or train in parts of France?”

It’s the smell — pervasive and pungent.

It was years later, at Willy’s Bar in Paris where, in truffle season, Willie “toasted bread, spread on butter then added sliced black truffles. That’s when the penny dropped that maybe Angelina Jolie isn’t right. Maybe you’d tire of her.”

He would eat white truffles. “But I decided I really liked black truffles better. Why? First, there’s the texture. They have crunch. White truffles are kind of limp. They don’t fight back at all. I like the crunch.

“And I like their subtlety. They don’t come out and get you across the room. Black truffles are subtle. Imagine white truffle with foie gass; it would overpower. That’s why they serve white truffles with bland food. Like cheese or pasta. And you don’t cook with white truffles. You eat them raw or apply them to something hot, which releases the aroma.

“Black truffles, you can cook — or eat raw. If I was stuck on a desert island, a rare island where truffles could grow, it would be black truffles I’d want — hoping someone had learned to cultivate them with palm trees.”

Trivia you should know about truffles

So what does the “black diamond” truffle taste like? To quote from Peter Alsop, writing in Salon magazine: “It is a paradoxical smell — light and heavy, redolent of both flowers and decay — that contains a hint of something neither nose nor tongue can at first name but which is, in the end, quietly evocative of nothing so much as sex.”

There are hundreds of types of truffles, as there are mushrooms, but only three are viable, say Chang and Thomas. The summer or Burgundy truffle; the spring or white truffle; and the “black diamond” Périgord truffle.

More than 90 percent of Périgord truffles are now cultivated.

Beware of Chinese truffles. They sell for around $30 a kg (compared to at least $500 a pound and often a lot more, depending on the season, availability and size, for the other three mentioned). But put a “real” truffle among the Chinese, it will pick up the aroma and fool a lot of people some of the time.

The cloying skunky aroma of truffle oil “is fake,” to quote Chef Ken Frank. “It’s all synthetic — flavored with chemicals — the salt, the popcorn, the truffle oil,” says Chang. This makes sense when you hear that truffles have a shelf-life of about a week. The scientific names of the chemicals synthesized and used in truffle oil are dimethyl sulphide, 2,4-dithiapentane and 2,4,6-trithiaheptane, which “are never listed using their scientific names, but as ‘truffle flavors’ or ‘truffle essence’ in the truffle oil ingredient list,” Chang points out.

It’s against the law in Italy (has been since 1985) to use pigs to hunt for truffles as they ruin the root system (not to mention gobble down the truffles, given half a chance). For this reason, many hunters have begun to use truffle dogs, with the lagotto romagnolo breed specifically recognized.

We went out with the dogs during our Napa weekend, even though there were no truffles to harvest. Alana McGee, a trainer from Seattle “where we have native truffles, plus people planting as they are here” said a dog with aptitude could be trained in a day. You put truffle oil (synthetic is fine for this) on a tissue to give the dog the smell; then on a tennis ball that you might hide — and that’s pretty much it. Dog trained.

It is legal to bring back truffles from Europe in your baggage but you can’t bring back dirt. That’s illegal. And you have to declare the value of the truffles. If you try and bring back white truffles, you won’t be popular!