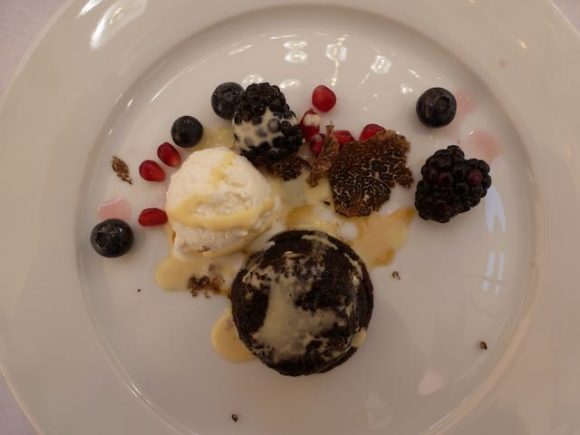 Sooner rather than later and most likely within the next three years, when you order a truffle dish in the United States — a famous “black diamond” Périgord truffle dish, which now requires your truffle to be flown in from Italy — the truffles will be locally grown and harvested.

“I’ve been cooking with truffles since 1981,” Michelin chef Ken Frank — executive chef and owner of La Toque located since 2008 at the Westin Verasa in downtown Napa, told me at the opening of the third annual Napa Truffle Festival (January 18 – 21, 2013), which kicked off with a wine and truffle appetizer tasting at his restaurant last night.

His “black diamonds” for the opening had been imported from Italy. But within two to three years, he expected to be using the local ones currently under cultivation in the Napa Valley.

“Think of truffles as underground mushrooms that attach themselves to the roots of a host plant,” Robert Chang, managing director of the American Truffle Company, (ATC) told the crowded opening party attended by Michelin chefs, scientists, truffle experts, would-be truffle growers, current growers, foodies who had flown in from around the country to attend, media and truffle fans. Everyone there to learn more about and experience the delights of what many regard as culinary treasures. During the weekend these truffles would be discussed, examined, probed, prepared, demonstrated, paired with wines and feasted upon.

Chang and Dr. Paul Thomas, partner and ATC’s chief scientist, were set to lead a scientific track on growing truffles. “We’ve built a network of truffle growing partners in 23 countries — as far north as Finland and as far south as South Africa,” said Thomas, who is based in the UK and keeps a handle on what’s going on in the different countries via the internet and in person.
Same as there are many kinds of mushrooms, Chang said, there are many kinds of truffles. ATC was working exclusively with the black (European) Périgord truffle, (known as the ‘black diamond’) — the world’s most expensive food, he said.

The ATC focus is to provide partners with the scientific know-how and support to cultivate these super-commercially-viable truffles. “A lot of people have tried to grow them and not succeeded because they think they will put in a few trees, wait five years, hope for the best and see what happens.

Hope is not a strategy

“But hope is not a strategy,” Chang said. “Science is how you get the highest revenue.”

The English Oak and hazelnut are the trees typically chosen to be inoculated with truffle spores. In the partnership between the ATC and growers, the orchard owner provides land and the resources and does the harvesting. ATC provides the science, support and back-up.

“Compared to grapes, truffles are far simpler to harvest,” said Chang. “You need dogs to help you sniff them out, not people.”

The weekend festival was set to include a truffle dog demonstration and mushroom foraging, among many other activities and between opportunities to gorge on truffles prepared by top chefs at assorted venues and meals.

To quote from William Makepeace Thackeray: “… we were aware of an odour … coming towards us … musky, fiery, savoury, mysterious … the truffles were coming.” He would be talking about white truffles, which have what I think of as a skunky cloying aroma/flavor. They cannot be cooked but can be good in salad and for example grated onto a hot dish so that the flavor and aroma are released.

The black, focus of the Napa Valley Truffle Festival, is the more discreet in terms of aroma; more delectable for many people; and more pricy. The black can be cooked or eaten raw.

I asked Chef Frank why the truffle oil I’d seen for sale all over the place, and cheap, including at Trader Joe’s, about three years ago now seems to have disappeared from the shelves.

“Truffle oil is fake (most being chemically enhanced),” said Frank, who opened his original La Toque on the Sunset Strip in Los Angeles in 1979. He was located at the Rancho Caymus Inn when he first moved to the Napa Valley.

Truffles on the menu at the 2013 Napa Truffle Festival had been flown in from Italy. He expected to be using locally cultivated truffles within two years, given that it takes five years for the truffle spores to grow to harvestable size.

“We’re two years away from actually harvesting and using locally grown truffles,” said Chang, who added that Napa had been chosen for the festival because it’s “the food and wine capital of North America”.