Travel to Poland: Welcome to Warsaw 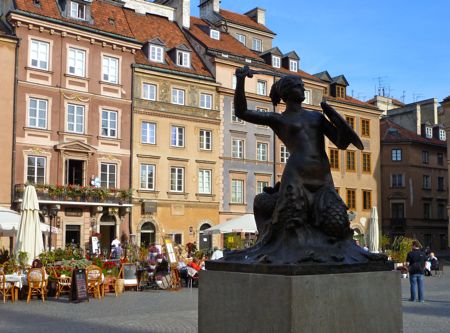 If there is a more romantic-sounding destination to fly into than Warsaw’s Frédéric Chopin Airport,  (re)named for the Polish-born composer and pianist in 2001, I don’t know it.

Chopin grew up in Warsaw, composed many works there before he left, at age 20 for France, settled in Paris at age 21, and lived out his relatively short life there (he died at age 39).

I am flying into Frédéric Chopin for a three-and-a-half week Poland vacation — with an agenda. The first week will be spent with a friend who, like me, had a Polish dad. The plan is to look into our roots.

Then I will go and “work” in Krakow for five days, if you can call culinary travel writing work. After that will be some time spent with my Polish cousin and her husband, who live in Germany. Some train journeys. More time in Warsaw. As many adventures as possible.

The culinary travel “work” part, while delicious, will qualify as work. More about that to come. The author and a friend from Warsaw clink glasses.

I am typically a wine drinker, which is appropriate in the two places I have long-term called home, South Africa and the California, USA. But prepping for my trip, I read that vodka is like wine for many Poles in terms of subtleties of flavor; that one might try sipping their smooth, refined vodkas with meals.

I also know from a previous three day foray into Poland, and by reputation, that they make excellent beer.

(I wasn’t aware until I met a winemaker there that they have a fledgeling wine industry. More on that in a later blog.)

When in Rome, as they say — or, in this case, when in Warsaw: “I will have a beer — whatever is on tap — and a vodka,” I tell the waiter the afternoon I arrive. My two travel buddies, one of them a Pole, from Warsawa, as they call it. (And note, the Poles pronounce “w” as “v” and “v” as “w” so Warsawa is Varsava and I am Vanda and vodka is wodka — and getting ahead a bit, Krakow is Krakov. And no, I don’t speak Polish but I plan to learn!) Warsaw’s Little Insurgent Monument
— a sculpture of a young boy who wears an over-sized helmet — commemorates the heroic children who fought against the occupiers during the Warsaw Uprising in 1944.

Our first stop will be the Warsaw Rising Museum, dedicated to the uprising of 1944 — the Polish resistance Home Army’s WWII (unsuccessful and catastrophic) attempt to liberate Warsaw from Nazi Germany that ended in the annihilation of the city, of the resistance army and of between 150,000 and 200,000 civilians who died, mostly from mass executions.

It’s 25 years since Soviet communist dominance ended in Poland. It’s 75 years since the end of WWII. A towering reminder in Warsaw is the stern, awesome — especially when lit in the evening — Palace of Culture and Science — the tallest and largest structure in Poland, according to the Warsaw In Your Pocket guidebook I pick up, which (the “palace, I mean — not the guidebook!) was commissioned by Stalin as “a gift from the soviet people”. The atrocities of war, the Holocaust, the slaughter of non-Jewish Poles by the Germans and the Russians — one element or another of Poland’s devastating recent past — is never far from the surface when you’re there.

Some of the many things I never knew and learn from Adam Zamoyski’s Poland: A History, prescribed reading from a friend who also had a Polish dad. For instance, that nearly 6 million Polish citizens had been killed, a proportion of one in five. “The proportion among the educated elites was far higher: nearly one in three for Catholic priests and doctor, and over one in two for lawyers. A further half a million of Poland’s citizens had been crippled for life and a million children had been orphaned. It lost it’s independence and almost half its territory — in defense of which the war had been declared.” Read the book for the full picture.

Which does not detract from, or diminish, the buzzy and buoyant present, the vodka and the beer, the kilometers of fertile farmland and forests one drives or travels by train through, the culinary renaissance that’s going on, the engaging and welcoming Poles or any of the country’s abundant attractions. But constantly what has gone before gives a sobering, textured foundation.

Before the museum that first day, we hit Warsaw’s Old Town, the oldest part of Poland’s capital — and stop for “dinner” at one of the many outdoor cafes in the market square. Dinner at 4pm worried me. But know, if you go, that the Poles call lunch “dinner”, it’s usually earlier in the afternoon than 4pm.

Later in the evening they have more of a supper — something light.

Although we didn’t always conform to light at night. And that was fine.

Warsaw’s Old Town market square is graced by it’s imposing sword-bearing mermaid statue. In fact, a replica; the original is safe in the city’s Historical Museum. This mermaid is the coat of arms and symbol of Warsaw.

We are in Poland in October. The afternoon is warm. This is the season known as Poland’s Golden Autumn when the weather is typically balmy, the foliage is turning and the trees are undressing for winter.

We order Polish specialties, naturally. The ubiquitous pierogi (Polish dumplings), melt in the mouth herring and a hearty cheese platter. We gulp our long glasses of Zywiec (beer); sip on the (Wyborowa) vodka.

This sets the scene for as many vodka experiences as there are days during a trail through small Polish towns that make us feel we’ve stepped back into the last century; of Teutonic castles that force us to read up on our history; of churches and cemeteries that leave us with no doubt that we’re in a Catholic country.

We are booked into the Harenda Hotel, which has a beer garden. We have a snack supper there of buffalo wings. Not Polish. But never mind. We drink a Zywiec beer and sip a Wyborowa.

The iconic mermaid, symbol of Warsaw.

Lunch on the market square in Warsaw.

Do they do herring better anywhere than in Poland?

More posts on Poland to come.