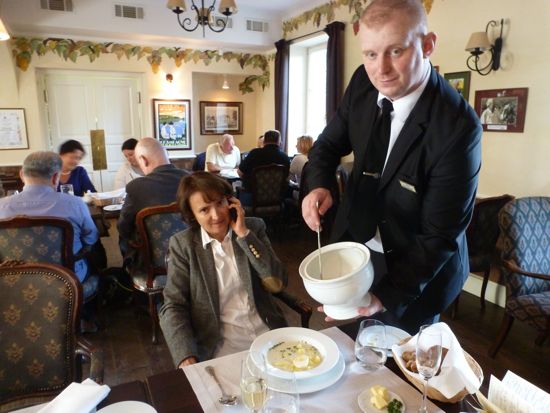 British-born Caroline Grabowska and her husband, Pawła Gąsiorek (Paul), are your hosts at Dwór Sieraków, a four-star Association of Polish Historic Hotels listed establishment, which has a fine dining restaurant recognized by Slow Food Poland, a luxury spa — plus a wine list that is one of the country’s finest.

Dwór Sieraków, thanks to Paul, is also known for fine vodka. In October 2016 in Warsaw, at Elixir restaurant and vodka atelier by Dom Wodki, the world’s first restaurant to specialize in food and vodka pairings, two of the creative nouveau Polish cuisine dishes I ate during a rather decadent Sunday night visit there were paired with Dwór Sieraków vodkas.

“During the communist era, the manor house was transformed to be a sanitarium for a period. Previously, it was a holiday place for children. Before WWll, it was a private residence,” Caroline tells me on my visit to Dwór Sieraków a few months before the vodka dinner.

“The last private owner (before she and Paul bought it) lived here in 1938. A government Minister of Finance from that pre-war time lost it at cards. So at least he had fun losing it (rather than having it taken away, as happened to so many at the time in Poland).” Caroline, who did several years of her schooling in Nigeria and lived in Africa during her teens, gives me a quickie tour of the property when we meet. She and Paul have had the place for 10 years. It has been operating as a hotel for five, after intense renovations.

I am there straight from a tour of the Wieliczka Salt Mine, which is not far from Dwór Sieraków. I am there to see their hotel, suggested as an upscale option for culinary travelers to Krakow and surrounds, and to meet Chef Janusz Fic.

Since Chef Fic’s arrival, the restaurant at Dwór Sieraków has become one of the small but growing number of dining establishments recommended by Slow Food Polska.

“We try to use ingredients that come from within 100 to a maximum 200 miles of here,” Fic tells me. So it’s fresh, local, seasonal. Poland fresh, local and seasonal. “We cook traditional Polish food in a modern way,” he adds in his Polish-English. By this, he means “we don’t use heavy sauces. We adapt to modern tastes.”

Old-school Polish cooking was heavy on double-cream, butter and flour, he explains. I (the author of this piece) remember my Polish dad cooking up a storm (cooking was his passion) with butter and cream. Never flour, though. “Now we use reduction more — and yoghurt in place of double cream.”

The current Polish culinary revolution started, Fic says, around 2000 when the first “local” food program was launched on Polish TV. It was then that cooking was first portrayed in Poland as a lifestyle and an art — not just something to be done out of necessity at home.

Men in the kitchen

It encouraged a lot of men to start cooking, he says.

The restaurant at Dwór Sieraków was the second in the Malopolska region (essentially the area around Krakow) recommended by Slow Food Poland. (Their first was a family restaurant in Krakow.) Cheers to modern Polish cuisine: in this case, the thymus gland of a young cow, at Dwor Sierakow.

Some of Chef Fic’s specialties?

Turkey in Malaga wine sauce. Schnitzel. (There is an overlap of cultures.) Oxtail soup. White borscht made with fermented wheat flour. Snails harvested from a nearby village. “We try to develop new things based on what we find locally.”

When I was there, they had a lot of mushrooms on the menu. Wild mushroom soup. Foraged mushrooms. “We have a group of people who collect them for us. Mushroom season ends mid-October, the end of summer into early autumn. Some companies organize buses and have mushroom-hunting expeditions,” says Caroline, who adds: “We change the menu four times a year.”

“Game is traditionally Polish, says Fic. Quail too. Wild boar. “We’ve had deer / venison / in the past.”

There is a reservoir that serves Krakow 5km from the restaurant. “We buy fish from there. Sweet-water fish and wild, not farmed, so very tasty.”

Paul is a wine aficionado. The afternoon I’m there, he is running a wine tasting class for students doing a one-year undergraduate wine-making and wine-appreciation class at the University of Warsaw.

The wine list is distinctive and comprehensive. Understandable, given that Paul has been importing wine for more than 20 years. He is the founder and editor of a Polish wine magazine. He has an impressive wine cellar. His company is one of the biggest wine importers in Poland.

Now listed in the Gault & Millau guide for Poland, the hotel and restaurant offer wine tastings, special wine meals and sommelier recommendations. They have received several ‘Decanter’ tributes for their wine selection and sommelier and been recognized by Wine Spectator for their wine list.

On occasions they will break from strictly local and their Slow Food focus and have, for example, an Italian menu paired with Italian wines.

While we chat about Dwór Sieraków, past, present and future, we nibble on wild mushrooms braised in a white wine sauce and served in a puff pastry nest. Traditionally, the old-fashioned way, they would be fried in butter and double-cream. But the chef is inspired that he can take the “fantastic raw material” and use his creativity to make something artistic and more appetizing.

The mushrooms are of the boletus variety (in Italy and South Africa, porcini). Dried mushrooms are big in Poland. Our dish comes with intense flavor; melt-in-the-mouth texture. Between bites I jump up to photograph a quail dish and then coq au vin.

“You choose for me,” I tell Paul when he asks me what, besides the appetizer nibble, I want to try. I am looking for “a morsel” having eaten lunch at the salt mine and there not being time to stay on for dinner.

Be careful what you wish for!

What is it? I ask when it arrives. “Sweetbread,” he says. “Meaning?” I ask, sort of knowing but not sure I want to think about it… “The thymus gland of a young cow,” he says. (Their beef is humanely and sustainably farmed and from the area and it was very good.)

I am poured their Spanish bubbly (cava) and invited to join the student wine tasting.

Caroline has lived and eaten well in Europe, the UK, South America (she is the region’s honorary Uruguay consul) and Africa. You feel you can believe her when she says Polish soups are world class. “You’re unlikely to find any country making better ones,” she declares.

Dwór Sieraków is a classic, historic Polish manor house, situated in four hectares of old wooded parkland. It has 29 four-star hotel rooms, the gourmet restaurant and the spa. Extra activities such as horse riding, golf and visits to nearby attractions can be booked. It is popular for conferences and not surprisingly, weddings.

See the Dwór Sieraków specialty vodkas at this link.

For more on Krakow and surrounds contact the Malopolska Tourist Organization in Krakow.

Relaxing outside at Dwor Sierakow.

Pastries in the restaurant at lunchtime.

I jump up to photograph a quail dish and then coq au vin.