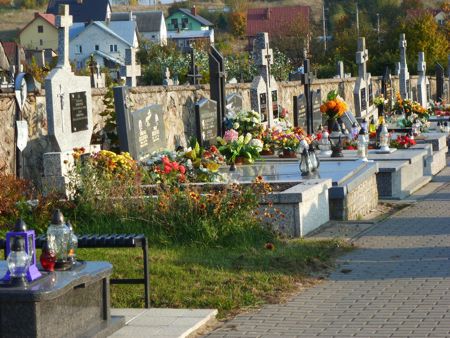 “We should take early breakfast and drive to Grajewo (up toward the Lithuanian border). Among the places we’ll visit in Grajewo is the old cemetery.” The Polish countryside. I’m here in the fall. The season is called Poland’s Golden Autumn for good reason… this is the first of many golden days. We stop after not too long at a roadside diner. It looks like nothing but we get an excellent cheese blintz, the thin crepe-like pancake squishy with what tastes like a mix of ricotta and cream cheese. Not too sweet. It looked just like this blintz I found online, with a recipe.

Over across the highway is a field of what look like mustard flowers — the ones that grow abundantly in the Napa and Sonoma valleys in the winter time when the vines are dormant and naked. Driving through the day I feel many times that we have stepped back into the last century. We drive through farmlands, pass through tiny hamlets that seem to just straddle the highway. Everywhere golden trees.

Then Grajewo, which has a melancholy run-down look and feel.

Until we get to the cemetery, which is both filled with wretchedness and misery — reading the graves, finding the war-dead. But at the same time, right here, in this moment, it is alive. Busy focused people are tending graves bright with flowers. I have never seen a cemetery given so much attention. “That’s Catholic Poland for you,” the Pole I’m traveling with says when I mention this fact.  My little traveling group of three all have Catholic roots. Another view of the cemetery at Grajewo.

Grajewo’s war history encapsulates something of the story of Poland.
To quote from Wikipedia:

The war cost the lives of around 5,000 people in Grajewo and about 30 percent of the town was destroyed.

I google “Grajewo cemetery” and find a link to Poland’s underground: The Doomed Soldiers: Polish Underground Soldiers 1944-1963 – The Untold Story.

We are booked for the night into a boutique manor, Dwór Kaliszki, approximately 30km from Grajewo and 205km from Warsaw. The place seems to be literally in the middle of nowhere and on a farm. We don’t see the cows or the horses but when we step outside to explore, we see meadows and paddocks and smell that they are here, in the barns.

It would seem this is an old manor farmhouse, beautifully restored and appointed. The restaurant prides itself in specialties of the Masurian region (where we’re headed the next day). Homemade bread, local products and herbs “from our own herb garden” and traditionally made cuisine — in particular pate, venison, dumplings stuffed with duck meat and vegetable broths. We try them all.

We drink Polish beer and between three of us, two bottles of burgundy. The dining room with it’s starched white tablecloths and heavy silver is empty except for we three, all with Polish links, journeying together. A group of photographers staying at Dwór Kaliszki are outside in a gazebo having the Polish equivalent of a barbecue. The dining room at Dwór Kaliszki.

Having the place to ourselves and a single waiter who looks in on us just often enough, we entertain ourselves by taking turns to each choose a favorite tune / a favorite artist / a favorite song from You Tube, using my iPad. Goes without saying, there is good WiFi in Poland.

It is a raucous night. Light relief after the emotional cemetery experience. And the best reason I’ve found to date for having a iPad.