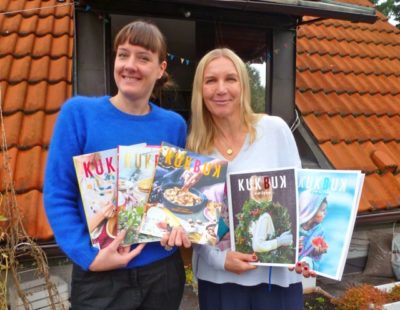 KukBuk grew out of a ‘love of cooking, eating and communicating round food.’ The intention was to merge cultural, culinary and lifestyle elements. We meet the editors of the award-winning Warsaw-based magazine. Then visit Wilanów Palace. 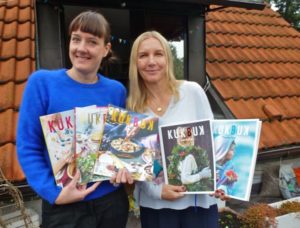 Monday and Day Two of our six-day study tour of Poland. Our brief is to meet Kuba, our guide, in the lobby at 08:15, which we duly do, having nibbled on yoghurt, herring, Hungarian plums and other delights in the Sofitel breakfast room.

First scheduled meeting is with representatives of the culture-culinary magazine KukBuk: their editor in chief, Agata Michalak, and publisher and special editions editor, Daria Pawlewskaat, at the KukBuk (CookBook) offices, located in a double-story house with a herb-planted roof garden in the burbs of Warsaw.

It is a delightful and interesting meeting as we sit and ask the pair questions over coffee in a downstairs room off a kind of test-kitchen.

Outside it is chilly. Rainy. Inside there is the warm buzz as people working. People who wander in and out. Greet us. Get on with the business of production.

The meeting is interesting not least because of the unexpected and unprecedented success of the magazine. To a journo who has worked on magazines and witnessed the effort that goes into putting them into the world (and sometimes seeing them bite the dust), the story of KukBuk is revelatory in a “what is to be learned?” sense. 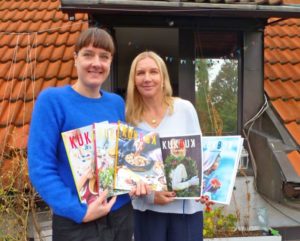 KukBuk’s editor and publisher, Agata Michalak and Daria Pawlewskaat, with their magazine.

Agata: “The magazine grew out of a pure love of cooking, eating and communicating round food.”

The magazines they saw around them before they launched KukBuk “were either very practical with loads of recipes, or lifestyle magazines.”

What they wanted to do with KukBuk was to merge cultural, culinary and lifestyle elements. “So there are recipes. They are for the home chef. They are easy to follow. The language is engaging but not too sophisticated. We are trying to be approachable.

“We didn’t want to appear remote or elitist.

“It is a magazine for a reader who dreams of a life slightly more elegant than their own. Slightly out of reach. Aspirational.

“We saw a gap. But it was more personal than that. We didn’t see a magazine (on the shelves) that talked to us. A food-related magazine that was interesting, intelligent and engaging.

“We wanted it to fill a niche under the visual arts. Film, etc.

“We thought it would be a hobby for us; a small project. But the market was surprisingly positive.”

They quickly flourished and grew. And continue to.

There is a new energy in Poland 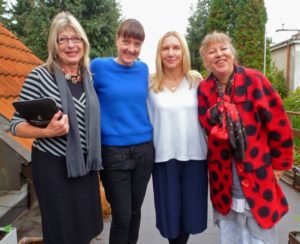 “There is a new energy in Poland. We are competing with the big international publishing houses. We compete visually—and in terms of giving people content they like to read.”

What it seems speaks to people is that there is substance of interest—beautifully, creatively and quirkily presented. Often with humor. sophistication and out-the-box.

“We’re not interested in celebrities. We want to promote Polish talent. Polish photographers, etc. We don’t buy in from the agencies.”

Like most creatives, culinary and other, we meet during the study tour (and that I meet during the next four weeks traveling on my own) they have huge reservations about the repressive and reactionary nature of much of what is currently going on politically in Poland.

What they align themselves with and are committed to is Poland’s dynamic culinary scene and culinary renaissance. How Poland is taking its place on the world culinary stage. KukBuk is a dynamic part of this.

And that is how they present it in the magazine.

They talk about the current food trends in Poland. Warsaw has seen the reemergence of the traditional “bazaartjie” (BioBazar) of the 50s but brought into the 21st centure with a “hipster modern” identity and a new focus on organic produce.

Commenting on the food scene, they enthuse about the “really good farm cheeses” being produced.

“During the 2008 economic downturn a lot of people lost their jobs. As a result there were those who, for example, got a goat and went back to the land. There started to be a small wave of producers involved in cheese-making. And farmers with cows, making cheese with the excess milk.

“Some of this involved corporate people in their 40s who decided to change their lives. Not work as slaves anymore. Some of them started to produce cheese, bread, etc.”

They talk about the “proudly Polish” heritage movement.

“We as Poles are traveling a lot. Migrating a lot. Two million Poles went to the UK. Many went into gastronomy. Many learned a lot in Britain and brought what they learned back with them.”

They talk about Atelier Amaro, the first Polish restaurant to receive a Michelin star.

A second Michelin star for Poland went last year to Senses in Warsaw.  The mentions and Michelin-recognized restaurants are growing year by year.

Before we leave KukBuk we take pictures up on their rooftop deck and swap Instagram addresses.

They give us magazines which are beautiful. And huge. And too heavy to carry back home. But I do…

A wander through Wilanów Palace

From the inspiring KukBuk meeting we are driven to Wilanów Palace.

Arriving early, we have a coffee and use the WiFi in their (uninspiring) little cafe.

Then wander both the inside and gardens outside. Truly worthwhile. Gorgeous art. Easy history lessons. A beautiful side-trip.

Then it’s on to our lunch date at Opasły Tom.

A detail at Wilanów Palace, Warsaw.

In the garden at Wilanów Palace, Warsaw.

The gardens are gorgeous at Wilanów Palace, Warsaw.