“Twenty years ago (during and immediately after the Soviet era) people were drinking shots, to get drunk. Now, they’re back to vodka for flavor, appreciation and enjoyment,” says Pawel Matczak, our host at Dom Wódki in Warsaw, the first restaurant in the world to do menu pairings with vodka. 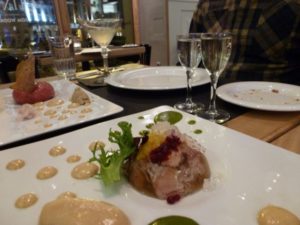 The ‘pork jelly’ with horseradish panacotta.

There’s a great Polish vodka story to be found online that relates to the Rolling Stones. In truth there are several versions of it. And it seems the truth, the whole truth and nothing but the truth of the story is debatable. But as several journos I have known like to say: Why let the truth get in the way of a good story?

So, this one tells the tale of the Stones 1967 concert in Warsaw. It being Communist-era Poland, it goes without saying there were clashes with authorities. There was also a voltage blow-out of equipment. There was madness and mayhem.

And, the story goes, there was a vodka-flavored barter that saw the Stones exchange the Polish zloty part of their fee for a wagon-load of Polish vodka.

It is a good yarn that very likely says as much about that repressive time in Poland as it does about the corresponding permissive time in the history of then-youthful Rolling Stones and their music. 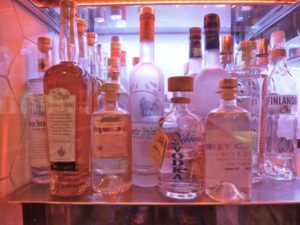 A handful of the 500 or so vodkas at Dom Wodki.

What flows through it is the reputation of Polish vodka (from voda, water), which I read online has been produced since the eighth century. Although I also read the first mention of the word and the drink dates back to 1405.

Elixir Dom Wódki (Elixir Restaurant & Vodka Atelier) lays claim to being the first restaurant in the world to offer a menu with vodka pairings. The website requests you be older than 18 to gain access.

Once there you can read: “The French have cognac and champagne, the Scots whisky, the Swiss cheese and chocolate, the Americans bourbon and the Italians prosecco and pasta. Mexico has its tequila, Spain its many types of wine, the Czech Republic its beer, while Poland has vodka, recognized the world over as its most iconic product, as well as distinct regional dishes and breads as the country’s main culinary flagships.”

Dom Wódki is a stroll from our hotel, so when we set off the evening of Day One of our six-day study tour of Poland, we know can walk (lurch?) back after our dinner. Except one sips these vodkas. One does not knock back Poland’s delectable vodkas. This is something I have learned and experienced on previous trips to Poland. See Travel to Poland: Na zdrowie from Krakow. 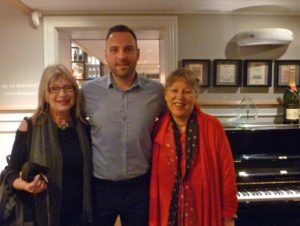 Our Dom Wódki host, dinner companion and adviser is Pawel Matczak. The restaurant has been open for two years (as of October 2017). The vodka atelier, where we eat, has been open for one month when we visit (in October 2016). Going on 60 percent of the 500 vodkas (and vodka derivatives) they stock are Polish in origin. They worked on the pairing concept for seven months before opening. It is “unique and universal”—and a work in progress, says Pawel.

“Older people are looking for vodkas they couldn’t find for years during Soviet times”—and sophisticated diners, both Polish and international, want these too, he tells us. The vodkas they have in stock came from five continents.

The most popular drink in Poland

Vodka is the most popular drink in Poland. “Twenty years ago (during and immediately after the Soviet era) people were drinking shots, to get drunk. Now, they’re back to vodka for flavor, appreciation and enjoyment. Potato vodka is a Polish tradition. These are often more citrussy and refined than the rye and wheat vodkas, which can be sweeter.”

And the menu at Dom Wódki? “Absolutely Polish.”

“Our mission: to show Polish cuisine differently,” says Pawel Matczak. In fact it is very much in line with the culinary renaissance seen in recent years in Poland. A renaissance that makes Poland a culinary travel destination of note.

“Typically Polish food was rustic and straightforward,” says Pawel. “Thirty years ago we were a small communist country. The people are changing. Poland is growing.” 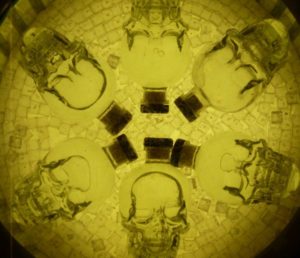 He cites what the French have done with nouvelle cuisine as inspiration. “Amazing ingredients and creative methods and presentation. Our idea is to do that. Creating food using modern techniques and wonderful local ingredients to showcase traditional Polish cuisine in new and inventive ways.”

We eat “pork jelly,” which is the softest jelly (no gelatin added) with horseradish panacotta and creamy baked garlic mousse (each a 10 on the mouth orgasm scale I’m working on at the time: See Cravings: A Zen-inspired memoir about sensual pleasures, freedom from dark places, and living and eating with abandon (Say Yes Press) Edition 2 (Mouth Orgasm edition—published August 2017). The pork jelly is paired with Finlandia vodka. 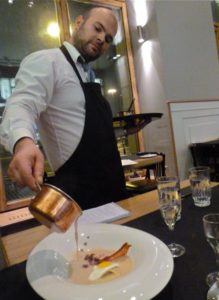 We cannot manage dessert but finish with a sticky fig vodka.

And here is a very good guide to Polish vodka link. And there’s another good vodka guide on this Tasting Poland link.

A vodka martini at Dom Wodki.

Zurek prep at the table.

In the Vodka Atelier.

Art on a plate.

Lovage foam with the beef tartare.