Innate Motion and the power of two (women) 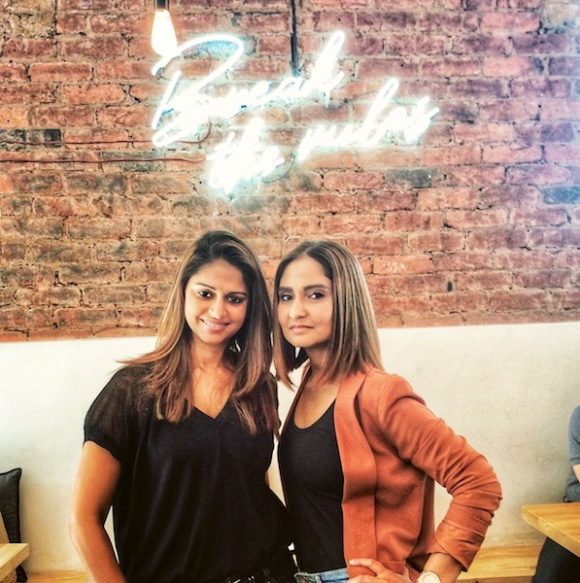 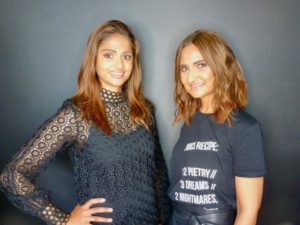 Is profit the sole purpose of your business? When in board meetings, is your single-minded focus “bottom line”? Does your business-speak zero in on “target audiences” and “demographics”? Do you work with people who are still married to the notion that sex appeal, stereotypes and status are the way to sell—just about anything?

If you answer yes to any of the above, it could be time to wake up to a new reality. To start thinking differently. To become part of the change already embraced by Fortune 500 companies and brands such as Unilever and Coca-Cola; forward-thinking medium-sized enterprises; and innovate start-ups.

Johannesburg-based Kanchana Moodliar and Durban-based Yasmin Kathoria are the South Africa-based directors of Innate Motion, the global strategy consultancy that has helped Unilever, Coca-Cola and others stay relevant and at the top of their game. It is no coincidence that Unilever CEO Paul Polman received the “Cannes LionHeart” at the prestigious Cannes Lions International Festival of Creativity in June (2018), an honorary award for harnessing commercial brand power to make a positive difference to people or the planet.

Key to Innate Motion-linked brand success stories is how those they work with have been steered to reframe business challenges as human challenges; equate profit with social impact; and make “purpose” a driver of meaningful growth.

“If a business comes to us and says their company or their brand is declining, we start by reframing the business challenge into a human challenge,” says Kathoria, who before she joined Innate Motion, was a director at Unilever, helping craft, build and transform some of the strongest brands in the world. 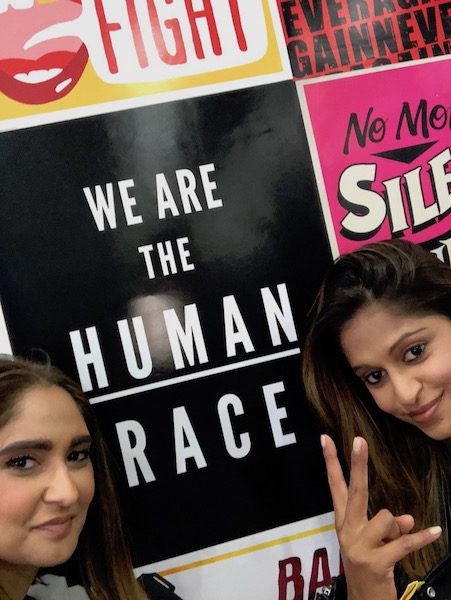 Moodliar and Kathoria getting inspired by New York.

“Big companies can get so caught up trying to manage profit and loss, they forget about the people. A traditional company, if business is in decline, will look at cutting costs and the supply chain.

“But we would turn it into a human issue. We use psychological principles. We even try to shift language. We don’t talk about the target audience or consumers. We talk about ‘the people we serve’.”

Moodliar’s background includes successes as a serial entrepreneur and brand strategist. Her erstwhile not-for-profit, Saris for Good Karma—she empowered “about 150 women to be able to have their own independence by turning sari fabric into finished goods and then selling them off”—taught her that when you have giver mindset only, you end up with giver burn-out.

She made the 2012 Mail & Guardian “Top 200 Young South Africans” list in the civil society category, won several awards. And closed the project in 2014.

What the dynamic, articulate and passionate people-person had learned by then was “with just the giver mindset, you get giver burn-out”. Not good. Not sustainable. “But what I realize now is that it is possible to do good while making a profit. To combine purpose and business.”

The “Karma” experience taught her first-hand that “profit” is not a swear word. And neither is “giving”. You just need to be pragmatic. Do it the right way.

“I think a lot of people see giving as just about charity,” she says.

Moodliar interprets the “giver” mindset as simply: “wanting to open our hearts to things that make the world a little better. It doesn’t mean being so focused on giving that we don’t get anything from it.”

The giver mindset is, however, at odds with the “taker” mind-set where the focus is on profit at the expense of anything: destruction of the planet; exploitation and slave labour.

“You can do good while making a profit,” Moodliar stresses. This is key to the Innate Motion success philosophy. “We focus on building people, brand and purpose.”

As more people vote with their wallets—the millennials, for example, who, Moodliar says, “give a damn” and who right now comprise the largest market with disposable income—they are voting for brands that are doing good in the world.

Power of ideas from Nelson Mandela 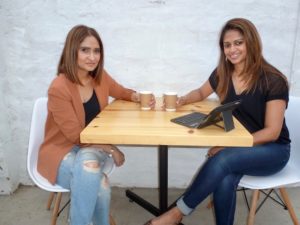 Innate Motion, founded by the current CEO, Christophe Fauconnier, who grew up in apartheid South Africa and learned lessons in inclusiveness and the power of ideas from Nelson Mandela, is based in Paris. The Innate Motion global team includes psychologists and anthropologists as well as brand strategists. They employ words like empathy and imagination when crafting what they refer to as “brands for life”: the focus being on creating value and improving lives.

“Applying ‘human sense’ to business is what we do because we kill value when we only apply ‘business sense’ to humans,” Fauconnier says. “We need to move beyond the transactional level: fill our world with passion and purpose.”

For a close-at-hand example, think of Lifebuoy’s “Help a Child Reach 5” campaign and its “High 5 for Hand-washing” spin-off, which has galvanized local communities to adopt the habit of hand-washing with soap. The program teaches children and adults that washing hands before preparing food and eating meals, after using the bathroom and during bathing can save lives. This initiative to date has helped around 482 million people to improve their health and hygiene, through hand-washing and oral hygiene, Peter Cowan, Unilever South Africa’s Executive Vice President, said recently.

Innate Motion, as a company, has shifted traditional constraints and parameters. “No-one is considered an employee,” says Kathoria. “In essence you are kind of running your own company. You’re almost an entrepreneur, but within a global network.”

They operate as an organization without borders (they are global, in 75 markets); without bricks (no offices—“we all work from home,” says Kathoria); without bosses (they are their own bosses). And they are a BCorp. (For-profit companies, which balance profit and social impact and various other standards and are measured and certified by a non-profit overseer.) 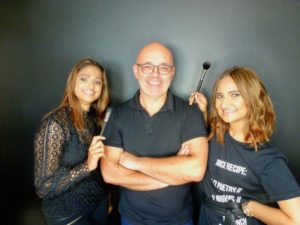 While Innate Motion is global and all who work there are independent at a level, “You still belong,” says Kathoria. “We have access to what we call ‘the tribe’. You have the expertise, knowledge and resources of the tribe.”

“A big part of what I love about what we’re doing in South Africa is that we’re a team of two women,” says Moodliar. “Together we are changing how business is done here by bringing the fundamental principles and global tools of Innate Motion—and a definite feminine energy.”

She and Kathoria traveled to New York earlier this year for inspiration ahead of their May launch, initially on Facebook and Instagram, of @BeautyRevolution_za, a beauty-centric campaign that will culminate in a two-day beauty festival at the Sandton Convention Centre, Johannesburg, in April 2019. Visit the Beauty Revolution website for more on this. Their intention is to redefine the ideals of beauty and reinvent the South African beauty industry; key “purpose” drivers being inclusiveness, empowerment, self-acceptance and self-love, among other things.

Read: Meet the Professionals Who are Changing the Face of Beauy on IOL.

“Beauty comes in all shapes, sizes, colours, ages,” says Moodliar. “Our inspiration comes from breaking down beauty standards and reshaping them to include the previously excluded. Beauty has been very Caucasian-specific—white skin, straight hair, skinny body—for much too long. We’re trying to evolve society. Old people. Fat people. Every person has magic. Beauty is not about perfection.” If you’re looking for a representative sample of such diversity, they both say, where better than South Africa?

While working at Unilever, the stylish Kathoria, charming, engaging, and with a confident, focused directness that draws you to her, was approached by a number of young women who saw her as a role model who “had it all”. She found herself mentoring them around careers, problems at work, relationship issues, and home and work-life balance. Many were young mothers. “They would say: you’re a director, you get to work and your hair is perfect, and you have a child, and you have a marriage. How do you balance all that?” 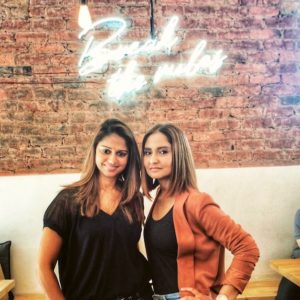 Now a single mom to a pre-teen son, Kathoria was married at the time. “And it was a very challenging time,” she laughs. “I had a teething child who was often up all night. To have no sleep then to go in early and sit at board meetings.”

She told them all the same thing. There was no silver bullet. “It takes hard work and juggling and compromises.”

For boardroom tips, she shared three lessons that had helped her from Facebook COO Sheryl Sandburg’s book, “Lean In”.

Kathoria says she finds joy in mentorship. A sense of achievement and pleasure comes with sharing your success with the women around you; growing success in other women.

“Absolutely there is still a glass ceiling,” she says in answer to my question of whether it still exists. “There’s a lot more work for us to do, as women in the workplace. But we’re getting there. South African women, especially, are very strong. We’re quite vocal. The women I see make me very proud: the work they’re doing; how they’re achieving their ambitions.”

Single mothers in South Africa, in particular, are noteworthy. “I think the figure—single mothers—is about 55 percent. So women in South Africa are working very hard, they’re making career progress, and they’re raising the nation’s children.”

Moodliar points out that at Innate Motion globally, women directors marginally outnumber men. “And I would say all the men in our company are feminists,” she laughs. “Which is not about burning your bra or not shaving your armpits and things people have made it about. It’s just about equal rights.”

Equal rights and human rights. Who can argue with that?