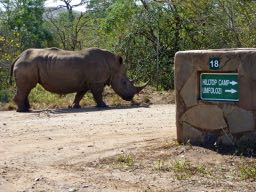 The slaughter of rhino for their horn—combined with the failure of the ban on international trade in rhino horn—is decimating Africa’s rhino population. Linked to this, the prohibitive risk and cost of keeping rhinos is threatening their survival. In pushing for Legal Trade for Rhino Survival (LTRS), eSwatini—formerly Swaziland—is leading the charge to save the rhino, writes Wanda Hennig.

“Rhinos are one of the greatest icons of African wildlife, which underpins the tourist industry—the largest and fastest-growing industry in the world, after crime. It is a non-extractive industry in which people come from faraway lands and pay for looking—taking away nothing but memories and leaving a very positive ripple effect that strongly boosts national economies.”

Ted Reilly,  chief executive of Big Game Parks (eSwatini’s national wildlife authority), conducts conservation activities on behalf of the King’s (King Mswati III) office and by extension the eSwatini Government. He was speaking at the the inaugural conference of LTRS (Legal Trade for Rhino Survival)—an alliance of conservationists and scientists committed to reversing the Cites ban on the international trade in rhino horn.

“We are gathered at this rhino survival function to promote the Kingdom of eSwatini’s intended horn trade proposal to be tabled in the upcoming Cites CoP18 in May 2019,” the country’s prime minister, Ambrose Dlamini,  said in a prepared speech delivered by eSwatini’s Minister for Tourism and Environmental Affairs, Moses Vilakati.

The 41-year ban and precautionary approach to conservation has proved ineffectual and this calls for policymakers to change their tactics and adopt a more proactive method of conservation. Cites, an acronym for the Convention on International Trade In Endangered Species of Wild Fauna and Flora, is an international agreements between governments. Its aim is to ensure that international trade in specimens of wild animals and plants does not threaten their survival.

Cites has been a marginally effective tool as it was initially designed to regulate trade, not to combat illegal wildlife trafficking, to quote Dlamini.

The eSwatini gathering, the first of three planned LTRS conferences, was held at (Big Game Parks) Mlilwane Wildlife Sanctuary, near the eSwatini capital, Mbabane. Follow-ups will in Mozambique (February 2019) and Pretoria. The Kingdom of Swaziland officially changed its name to the Kingdom of eSwatini (land of the Swazis) in 2018.

“The ban is clearly not working and the illegal trade continues. So does the slaughter of rhino to support this,” said Reilly.

Forty-one years ago Cites imposed an international ban on trade (legal buying or selling) in rhino horn. “We have lost over 100,000 rhino in Africa since that ban, so you have to be out of your mind to think it has been a success,” to quote eminent conservationist Dr George Hughes.

Too costly and risky

They point out that many who supported the Cites ban on legal trade in rhino horn 41 years ago have watched the subsequent plunder by criminals of the potentially sustainable natural resource that legal trade offers.

“It is inarguably true that protecting rhinos is prohibitively expensive and is becoming too costly and risky for many custodians to continue doing,” said Reilly. Meanwhile, there are conservation agencies sitting on “the most valuable self-renewing resource on earth,” which the Cites ban prevents them from using.

“This resource is rhino horn.

“Rhino horn can be harvested sustainably on an ongoing basis without killing a rhino because the horn keeps growing even after harvesting and its removal from the rhino is painless. The horn is worth $60,000 per kg on the black market, where the cost to the rhino is death.

“As things stand, because legal trade in horn is banned, this same horn has no legal commercial value—despite the fact that the animal does not have to die to legally and repeatedly yield its horn as a self-renewing natural resource. The average horn weighs about 4 kg giving it an illegal value of $240,000. This makes dead rhino far more valuable than live rhino. This is how nonsensical the ban on horn trade is.”

Michael Eustace, investment manager, conservationist and a founder of non-profit conservation organization African Parks, described to the conference how legalized trade in rhino horn could be controlled using a model based on the De Beers control of the diamond trade.

“A strictly controlled transparent rhino horn Central Selling Organization (CSO) based on a ‘smart trade’ model is seen as the logical way forward to serve the long-term best interests of Africa’s rhinos and for the benefit of nature conservation and rural communities,” he said.

This encompassed a well-monitored and carefully drafted international trading protocol that would take into account all relevant parties, including registration with Cites, “which will be able to perform the task for which it was created: to control trade (for the benefit of wild species).”

The blueprint for the smart horn trade would address these five key points:
— How to limit supplies to a level that both competes with illegal trade and guarantees a sustainable future;
— How to limit demand to sustainable levels of supply.
— How to establish a legal horn marketing channel that is clear and exclusive, and where no criminal horn can enter the legal channel;
— How to incentivize China and Far Eastern governments to close down the illegal trade;
— How to maximize profits for parks and ranchers.

“In South Africa this year, there will be about 850 rhino poached on both government and private property. (Official figures recorded 501 rhino poached between January 1, 2018 and August 31, 2018.) There is also poaching in Namibia (50), and in Zimbabwe and Kenya. Not all the carcasses are found, some horn is traded illegally and some is stolen from stock. In total, in 2018, the supply of horn out of Africa might be about 1,200 horns. This amounts to about 5,000kg and at a retail value of $50,000 per kg, amounts to a total trade value of $250 million,” said Eustace.

“All this money goes to criminals and none to parks and private ranchers who pay for the costs of keeping rhinos. This is because Cites banned horn trade in 1977.”

The plan would include the use of embedded chips and DNA, tax incentives and other factors.

“Smart” trade, he said, did away with speculators, poachers, and depletion of stock. “Poaching levels will fall because of much higher risks, lower prices and a much smaller market for the illegal trade. Poachers will be crowded out by the legal market.”

Scientific research conducted by Michele Pfab (of the South African National Biodiversity Institute) and others questions the sense of retaining the Cites ban.

Reilly drew attention to: “The enormous decline of Africa’s rhinos is in spite of billions of US$ donated by generous but often misinformed donors of NGOs, which have been set up to save endangered species. The rhino crisis is a very fertile platform from which to raise money.

“Some of these NGOs demonize custodians who suggest legalizing the trade to compete with illegal trade. This when they trade their own services for money and pay themselves from donations received to save endangered species.

“How can we sensibly continue with this madness of knowingly giving criminals the monopoly on their illegal trade, when it is visibly driving rhinos towards extinction?” he asked.

Some conservation agencies could not even finance uniforms for their rangers, let alone pay them enough to keep some of them from becoming criminals themselves.

“Custodians need finance and we should not be shy to face accusations of being mercenary. Neither should we be embarrassed to be called traders of wild animals because our accusers (in the NGOs) are also traders. They trade their services for money. And we all survive under the economic imperative, which has trading at its core.

“What is wrong is when greed takes over.”

Another rally cry that made no sense was the call for demand reduction and suppressing the value of rhino horn.

It was not realistic to suggest one “educate” those who have long-held cultural and traditional beliefs associated with rhino horn. And to grandstand and burn elephant ivory and rhino horn was sheer madness “which may resonate with affluent societies, but to poor people with families to feed and children to educate and clothe, it is the height of foolish extravagance and waste.”

“There is no shortage of propaganda and advocacy to ban all wildlife trade because wildlife globally is declining by 60 percent. This figure was reflected in international media a few days ago (see the World Wildlife Fund Living Planet Report ). This is deliberately skewed information (see National Geographic on the “widely misinterpreted report”) provided to the media by donor-dependent organizations which thrive off wildlife in crisis.

“While it is true of some regions, a notable exception to this wildlife decline is in Southern Africa where wildlife has been endowed with private ownership and its commercialization been legalized. The result in South Africa is that the numbers of wild animals has increased 20 fold in the last 50 years, while natural conserved habitats designated to conservation have increased three-times.

“There are today more wild animals on private land than there are in national and provincial parks collectively. By contrast Kenya, Africa’s perceived iconic wildlife focal point, has lost 80 percent of her wildlife estate over the same period of time after banning commercialization and consumptive use of wildlife.”

“It is the custodians who are saving the rhinos, not Cites,” said Reilly.

“Cites has not saved a single rhino.

“Nor does Cites own a single rhino, yet it carries huge influence on how rhinos should be managed.”

Did you know:
Rhino horn grows about four inches a year in good habitat. One option if the rhino horn trade ban were lifted is to harvest horn, which is a renewable resource. As things stand now, rhino are either slaughtered for their horn or the horn is hacked out and the animal left to die.