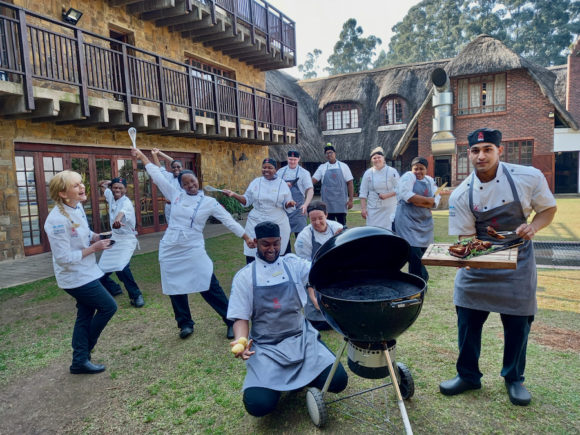 Remarkable. Difficult to think of a more appropriate word to describe Jackie Cameron. Award-winning chef. Food sorcerer. Founder-principal of the Jackie Cameron School of Food & Wine in Howick. “Witch.” We both laugh at this one. “I think a lot of the staff thought of me as a witch and were pleased to see the back of me when I left Hartford House,” she says.

That was back in 2014 after Cameron – Chef Jackie – having been given the run of the Hartford House kitchen as head chef at the age of 20 at the end of 2002, had effectively put the rural KZN restaurant near Mooi River not just on the South African but on the international culinary map.

Chef Jackie Cameron is a role model and icon for many an aspiring and inspired chef. And not just in KZN. She makes it look seamless and easy, which success seldom is. But when passion is driving you, you’re fuelled and alive.

The “t” word, as in tired, is a swear word at the school, Cameron says. “Everyone has demands and complications. Everyone has a lot to do. Someone says they’re tired, it brings negativity into the space and I say no swearing.” But shit is allowed. “Shit is not a swear word,” she laughs.

Read my full article Chef Jackie: A legend creating a legacy in TGIFood in the Daily Maverick.