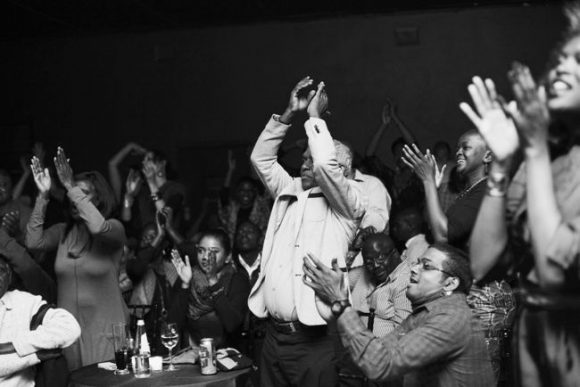 Some Durban businesses rev up after dark and even after midnight. Meet Ndabo Langa, architect, entrepreneur, Renaissance man and founding owner of The Chairman, a world-class, sophisticated, high-end jazz bar located in the worst part of the city for good reason.

Versions of this story were published in Business in Durban and The Ridge magazine, Durban, in April 2015. First published on WandaLust on 05-24-2015. Updated June 2016 and November 2022. Architect Ndabo Langa in The Chairman.

If not your planned destination, you could drive right on past The Chairman, which has no sign to lure you in. But if you know where to look as you make your way down towards the old Smuggler’s Inn part of Mahatma Gandhi, formerly Point Road, where the buildings are derelict and the neighborhood grungy, you may smile each time you glance to your left in the block beyond a breakfast café and a vintage store, then two crumbling building with weeds growing from the cracks, to see: modern heavy glass and vintage carved wood doors, chandeliers and red drapes and an art gallery, previously filled with grand oversize comfy couches (moved upstairs post-Covid to a concert room), now featuring monthly curated exhibitions around themes. Also an art-and-objet d’art filled eatery and a cool coffee kiosk. All this totally at odds with anything you might expect to find among the dilapidation and urban decay.

Then, if you are drawn to visit what is arguably the coolest jazz bar in the country, with it’s huge gilded mirrors, assorted Persian rugs, cocktail and Champagne bar impressively decorated with a battalion of antique glass decanters — and great music, both live (last time I was there the sultry Lihle Ngongoma on vocals) and from the resident DJ (who started with Nina Simone when Lihle and her band took a break) — you most likely will be back for more. And more.

The capacity crowds that make their way to this crummy part of the Point late night on Thursday, Friday and Saturday reflect a resurgence of interest in clubbing and hot and happening music in Durban, sparked in no small part by this destination venue that has set a new benchmark all the way from sophistication and innovation to service and diversity of clientele. It is also proving that the running-a-club business model is not a one-size-fit-all deal. Ndabo Langa’s Chairman featured in Business in Durban and The Ridge magazines.

Architect Ndabo Langa is founding owner of The Chairman. It’s his baby. His passion. The decor, from the vinyl album covers — John Coltrane, Thelonious Monk, Miles Davis and others — that line two walls in the primary lounge area, to sculptural pieces strategically placed on the gleaming main bar top, to the animal trophies, the Mies van der Rohe and Le Corbusier chairs, the church pews and points of interest everywhere you look, reflect his taste and come from “a bit of an obsession” that started about 12 years ago — collecting “things I see that I love”.

But The Chairman is bigger than any of this. It’s raison d’être goes beyond Langa’s self-confessed fascination with the craft of cocktail creation; beyond his desire to create the best serious jazz bar possible. His business plan goes way beyond any direct desire to rake in the money.

“It is part of the urban renewal initiative we’ve decided to lead here at the Point,” Langa says. By “we” he means the team he heads as founder and director of the Diverse Group of Independent Thinkers (DGIT), a firm of design consultants located less than half a block away.

The Chairman shows what is possible when creative conceptualisation, regeneration, gentrification and marketing are spliced as part of a strategic vision.

The design process was organic There’s lots to catch the eye at The Chairman’s main bar.

“With something like this, you can’t have a preconceived idea. You have to absorb the space and understand what’s necessary. The facebrick wall inside, for example: the dominant feature. You might think it was a conscious design or aesthetic decision. But no. It had to do with being practical. That wall had been plastered but there is a ruin outside and the water was coming through. The best thing to do was to strip off the plaster and let it breathe. It was something that had to be done that worked.”

Langa, who lists the Music Bridge “one of our first projects” at the Warwick Street Market, the Umbilo Station “again, going back about 12 years — it’s a bullet-shaped elevated building that makes you think about architecture” and the “stunning” “wicked!” Ntuzuma Magistrates Court in Bridge City, Kwa Mashu (to quote a couple of online enthusiasts) among his most inspiring-to-him projects to date, was earlier in his career involved in the development of uShaka Marine World: “the retail area and the design of the ship, all the way to the basement”.

“uShaka was supposed to act as a catalyst for development in the area,” he says. But “there is a thought the Point needed mixed densification, not a theme park. I think we need to go back to basics. Make this people-centric as opposed to car-centric and give people incentive to open businesses in this part of town”.

The worst of the blocks in terms of ruins and dilapidation

The 41-year-old son of South Africa’s former Chief Justice Pius Langa, who instilled the values of humility, hard work and education, admits that launching any venture in “a ghost town” and “the worst of the blocks in terms of ruins and dilapidation” in a justifiably shunned part of Durban “takes faith and probably some stupidity”. Jazz lovers enjoy the vibes at The Chairman in Durban.

The objective, therefore, was “to create a destination with the aim of making people rethink the Point”. The intention: “to encourage a good neighborhood”. So that maybe another bar or a restaurant or a bookstore would join him on the block, complete the picture, give people a collection of reasons to visit — to revive this area. “Possibly the vision is to see Mahatma Gandhi, Point Road, become a little like Bourbon Street. It would happen if there were ten things to do here at night. Now there’s only one thing.”

But, “We’re slowly seeing stereotypes being broken. So for example, we do get packed and we encourage people to share spaces. You end up interacting with people you would not have imagined interacting with, be it a fellow South African of a different race or someone from a different country. The space somehow allows for that interaction to happen.”

Part of opening The Chairman was also to contribute to the revival of Durban’s live music scene. Early on, there were a lot of musicians but not a lot of bands. “Now we have musicians knocking at our door and if an artist is performing anywhere in Durban, we grab them. We always have a band (starting at 11pm) when we’re open. Musicians tell us there’re getting more gigs. I like to think we’re big contributors. We’ve spent nothing less than R1.5 million on bands, and that’s from the tills. So what we make, we’re putting back.”

Service, he says, is a priority. “But it’s difficult to find the staff who will understand what we’re trying to do. Recruitment is not easy. Most of us are not from the hospitality industry. A couple are into fashion, for example. Designers who want to work here, not because they want to work in a bar, but as an extension of their lifestyle. We’d hate to lose customers because we can’t take care of them.”

Plus: “This kind of business is not as glamourous as you might think. You’re dealing with slightly intoxicated people. For you its a job, for them its having a good time. The pressure of servicing and pleasing the customers, who can be very demanding, takes its toll.”

Langa describes the big-picture business model as “quite organic”. Being his own client meant the concept, too, developed organically and remains a work in progress.

We want to be seen as at the forefront of rejuvenation The decor is eclectic at The Chairman.

“The model for DGIT is to activate spaces like those; to stimulate an area. We want be seen as at the forefront of rejuvenation; walking the talk; putting money where our mouths are; leading by example. For DGIT to benefit, it is essential that we are successful.

“This initiative — the business model — was a conscious investment made for reasons other than for The Chairman to just be profitable. There is that passion driving and sustaining what we do. And in the first year-and-a-half of being here, things are looking quite positive.”

Note: The Chairman closed for two years during Covid. Langa has made changes and done a lot of redesign during and since. The good news is, there are a lot of new features and offerings and all in all, it is better than ever. Check out happenings on Chairman Durban Instagram.

Read an exclusive “in his own words” Q & A with founding owner, architect Ndabo Langa, published here for the first time.

The Chairman, 146 Mahatma Gandhi Road.
Owned by Ndabo Langa, DGIT.
What: Nonpareil high-end jazz bar and cocktail lounge. Several lounge areas to choose from. Super-cool and classy decor. This club would be hot in New York City. Seriously good service.
Clientele: Eclectic, international, multi-cultural, high-end. People who are “not so young” and “not people you’re likely to bump into in Florida Road”. Jazz connoisseurs. People with sophisticated and refined music tastes.
Music: Top class jazz bands; before and after the live music, cool DJ with retro sensibilities spins.
Open: Thursday to Saturdays from around 7pm till after band stops at 2pm.
Couvert: R150 entrance fee per person is deducted from your bill when you pay for drinks/food.
Food: Thin-crust artisanal designer pizzas / wood-burning pizza oven. Meat platter to share for four people includes goat, ostrich sausage and turkey (R300). Menu will expand to include paella and more.
Drink: You name it, you can order it. Mixologists and barmen know their stuff and do it with aplomb.© Wanda Hennig, 2022