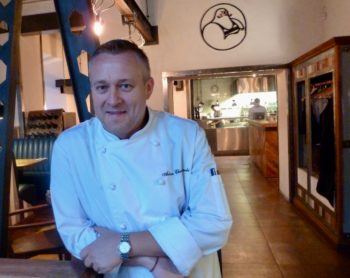 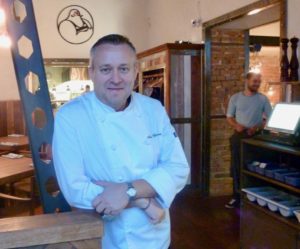 [Corroborated by the fact that Krakow has been selected as the 2019 European Capital of Gastronomy. In other words, the best city in Europe to go have a culinary adventure. (Added 2019.)]

The whole of Poland has seen a culinary renaissance. It goes far beyond the legendary soups, sauces, venison, ubiquitous pierogi (dumplings) and seasonal dishes, especially those made with forest-foraged mushrooms and wild and cultivated berries.

It’s all been happening, chefs you meet will tell you, since the restrictive post-World War II Soviet/communist regime with it’s prohibitions ended a short 25 years ago.

“People are becoming interested again in food. Good food. Culinary traditions that got lost are being revived. I’d say this is coming back to the ‘normal’ situation,” says Chef Adam Chrząstowski. (See Chef Adam on Facebook.) 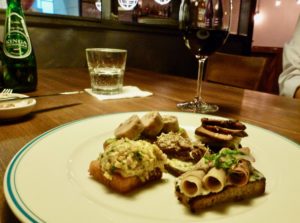 Chef Adam tells me the five items I’m about to eat are all from a young calf.

We’re sitting in his restaurant, Ed Red, one of the many great eateries in old-town Krakow close to the market square. It is “a meat restaurant” he will tell you unapologetically. It had been open for 18 months as of October 2015 and was the first restaurant in Poland to dry-age its beef.

Note: There is now a second Ed Red restaurant, in Warsaw. Check it out on the Ed Red Restaurant website. (Updated November 2018.)

The fridge for dry-aging is positioned just inside the restaurant’s front door at Sławkowska 3 Street. “We use only local Polish beef. And from no more than 100km away,” he says of the fresh and local food philosophy of the restaurant, recognized by Slow Food Poland.

“We try to respect the whole animal. Our restaurant is dedicated to meat. Our logo shows an athletic man. ‘Like to meat you’ is the slogan. We are for the protein lover,” he laughs warmly.

“The process forces us to control the meat not only when the driver brings it in, but from the start… How it was farmed, slaughtered. In the dry aging you can feel all these things.”

Dry-aging wouldn’t work for beef “fed” with chemicals, he says. In the same vein, “If you fed fish meal to the animal, the steak would smell of fish. If the animal is stressed when slaughtered, you’d know from the ammonia produced in the meat.” 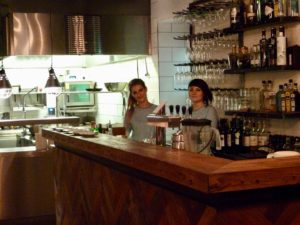 He knows all the farms, the farmers — their animals. He can show you pictures of some of them on his cellphone.

“People typically, traditionally, used the whole animal here in Poland,” he says. Good economics plus part of the circle of life. Sustainable; good for the environment.

I say I’d like to try something local; traditional.

Be careful what you wish for comes to mind when the waitress puts down a plate and Chef Adam tells me the five items I’m about to eat are all from a young calf (veal): Eating the “offal” is in part traditional and in part “respecting the whole animal,” he explains.

“Some of these recipes are classic — my grandmother always served tongue with horseradish and rye bread.”

Traditionally, he says, you have liver with fruit. The sweet and sour taste. Hence his liver with pear and onion. “The sweetbread, I keep light with parsley.

“In the cities after WWII we had these (joints) — tania jadka — like cheap bars where you could buy dishes like ears of pig, kidneys, the cheaper parts. Now many guys say, I’m not going to a restaurant to eat cheap cuts! I love that I can play in the kitchen, revive these traditions that date back to way before WWII; that we’re educating people.”

Verdict? Well, the idea of the brains threw me. But surprisingly, I’d eat Chef Adam’s brains again and the sweetmeats, in terms of flavor and texture, are a hard act to follow.

But we do, with a juicy dry aged steak followed by an Ed Red oatmeal crumble, which proves they can do more than meat the challenge. Blackberries they preserve themselves; a steamed cheesecake comprising egg yolk, egg white, vanilla, quark and sugar. Served in a glass.

If you become a cook, you’ll never go hungry…

Chef Adam started at culinary school during Soviet times. If you become a cook, you’ll never go hungry, he remembers his parents saying.

“There was nothing good in the shops then. At the culinary school the teachers didn’t even have the produce to show you. Cooks drank a lot. They made swindles. That was typical. It was the Communistic reality.” 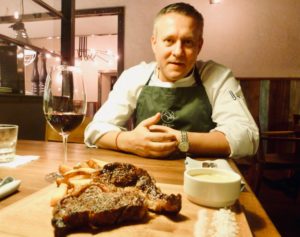 Ed Red was the first restaurant in Poland to dry-age its steaks.

After culinary school, he decided to study philosophy. Then he traveled through Europe, using his kitchen training to get simple jobs in restaurants. “I’d work for two or three days and use the money to move on.”

In Switzerland he got a job at a Michelin star restaurant. It was a revelation and “…amazing. I knew that if this kind of gastronomy were ever to happen in Poland, I wanted to be part of it.” After a couple of years on the road soaking in the history and culture of Europe and experiencing a variety of restaurant kitchens, he returned to Poland and started working at the prestigious Hotel Bristol in Warsaw.

“That was 1992. A lot of changes had taken place by then. International cuisine was coming in. Things I’d seen in Switzerland like foie gras, caviar, lobsters.”

He then moved to the The Sheraton in Warsaw. Then there was a spell in Shanghai, China. Then back to Warsaw, to a boutique hotel. “I knew I wanted to cook the Polish way. That I wanted to use local products.”

This came about in Krakow. Before Ed Red, he had a stint at the Krakow’s erstwhile Ancora, which gained a Slow Food Poland accreditation, in no small part thanks to him.

“Slow Food is very active in Poland,” he says. It’s about supporting local food products, traditional dishes. “The EU (European Union) is backing / protecting traditional products and dishes throughout the whole of Europe. Each country has it’s dishes, its traditions. Slow Food is helping with the marketing. The EU give labels, they also help protect products and producers.” He has a vivid memory from a hitch-hiking experience. He got a ride with an elderly man, in his 80s, beautifully dressed, in Germany. He was driving a Porche — at about 250mph, which is not uncommon on the autobahns.

“He said it will take two generations at least to get rid of the Soviet residue. I think that’s true. I still sees people who want rules. Who want to be told what to do. But,” he says, thoughtfully, and in my projection, appreciatively, “my kids — they are losing that…”

Two weeks before we met, he was in Paris showcasing Polish cuisine. The kind of gastronomy he saw when traveling in Europe as a younger man is now happening in Poland and Chef Adam Chrząstowski is at the heart of it.