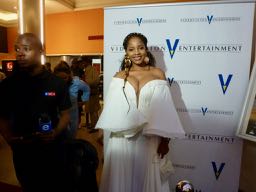 BACK OF THE MOON won the Best South African Feature Film award while Les Misérables won both the Best Feature Film and Best Screenplay awards at the 40th Durban International Film Festival, Africa’s oldest and most prestigious film festival.

The Durban International Film Festival is included as a documentary feature qualifying festival by the Academy of Motion Picture, Arts and Sciences. This means that both the winners of the best documentary, For Sama, (which also won the top Amnesty International award) and Best SA Documentary, Buddha in Africa, automatically qualify for consideration for an Oscar nomination.

The closing night film at DIFF 2019 was Bhai’s Cafe directed by Maynard Kraak, centres on “the Patel Family” and their cafe, the cornerstone of the Wynberg community in Cape Town.

Back of the Moon, directed by Academy Award-winner, Angus Gibson, stars Richard Lukunku, Moneoa Moshesh, Lemogang Tsipa and Thomas Gumede, and is produced by Desiree Markgraff and executive produced by William Kentridge and Anant Singh.

The film had its world premiere at DIFF2019. The film is named after a famous jazz club in Sophiatown. The accounts of Sophiatown tell us that it was a multicultural melting pot, a hive of political activity and a hub of black intellectualism.

Said Director Angus Gibson: “Durban is my home town so it is especially great for us to be recognized at DIFF. The film was truly a collective effort and every crew and cast member should feel that this award belongs to them as well.”

Commenting on winning the Best Feature Film prize, Ladj Ly said: “It is indeed a great honour to win the Best Feature Film Award at the Durban International Film Festival.  It is a very special award for us as it is the first award for Les Misérables to come from Africa.” The film highlights the challenges faced by immigrants and marginalized communities.

A total of 19 awards were given out at the ceremony:

Best Amnesty International Durban Human Rights Award at DIFF 2019: For Sama directed Edward Watts and Waad al-Kateab—a stunning documentary “that is both an intimate and epic journey into the female experience of war,” to quote from the publicist notes. “A love letter from a young mother to her daughter, the film tells the story of Waad al-Kateab’s life through five years of the uprising in Aleppo, Syria as she falls in love, gets married and gives birth to Sama, all while cataclysmic conflict rises around her. This feature documentary was awarded the Prix L’Œil d’Or for Best Documentary at the 2019 Cannes Film Festival.”

Best South African Documentary: Buddha in Africa directed by KwaZulu-Natal based filmmaker Nicole Schafer. The award is accompanied by a cash prize of R25,000.

What is of significance for this first-time feature filmmaker is that DIFF is included as a Documentary Feature Qualifying Festival by the Academy of Motion Picture, Arts and Sciences. This means that Buddha in Africa, automatically qualifies for consideration for an Oscar nomination.

The 90 minute documentary about a Malawian teenager caught between his African roots and Chinese upbringing had its world premiere at the HotDocs Documentary film festival in Canada in April, and opened the Encounters Documentary Festival in Cape Town and Johannesburg in June where it received a Backsberg Encounters Audience Award.

It was also in the official selection at this year’s Sydney International Film Festival in June, and has a host of other festivals lined.

In 2011, Schafer pitched the project at the Durban FilmMart, the industry development program of the Durban Film Office and the DIFF. It was here that she won the International Documentary Festival of Amsterdam award for the Most Promising Documentary, and travelled to IDFA in 2012 where she was able to further develop the project.

Best South African Feature Film: Back of the Moon directed by Angus Gibson The film received a cash prize of R25,000.

Best Feature Film: Les Misérables directed by Ladj Ly. The award is accompanied by a cash prize of R50,000.